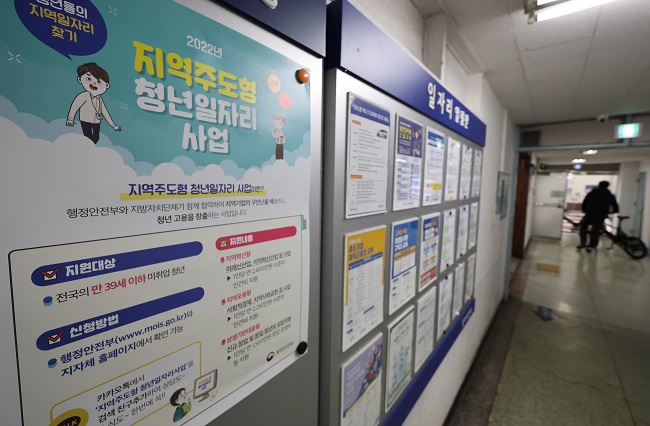 This file photo, taken March 16, 2022, shows information about job postings at the government office of Gwangjin Ward in Seoul. (Yonhap)

SEOUL, April 13 (Korea Bizwire) — South Korea reported job additions for the 13th consecutive month in March, but job growth slowed from the previous month as employment in in-person services was hit by the upsurge in COVID-19 cases, data showed Wednesday.

The number of employed people came to 27.75 million last month, up 831,000 from a year earlier, according to the data compiled by Statistics Korea.

The number of employed people grew by the largest for any March since 2002, when it rose 864,000 on-year. But the March tally was lower than an on-year increase of 1.14 million in January and 1.04 million in February.

The statistics agency said the trend of job growth has been extended every month since March last year amid the economic recovery.

“But as uncertainty about the virus situation and exports remains high, we need to gauge the job market situation going forward,” Kong Mi-suk, a senior Statistics Korea official, told reporters.

The South Korean economy has been on a recovery track on the back of robust exports. But it has faced heightened economic uncertainty amid the fast spread of the omicron variant and surging energy costs caused by Russia’s invasion of Ukraine.

Job data pointed to overall improvements in line with the economic recovery. But employment in face-to-face service segments, such as accommodations and retailers, declined on-year amid the omicron wave.

The employment rate of people aged 15 and older rose 1.6 percentage points on-year to 61.4 percent last month. It marked the highest rate for any March since the statistics agency began compiling related data in July 1982.

The number of economically inactive people — those who are neither working nor actively seeking jobs or people outside the labor force — reached 16.6 million in March, down 277,000 from a year earlier. It marked the 13th consecutive month of an on-year fall.

The wholesale and retail sector also reported an on-year drop in jobs of 32,000. 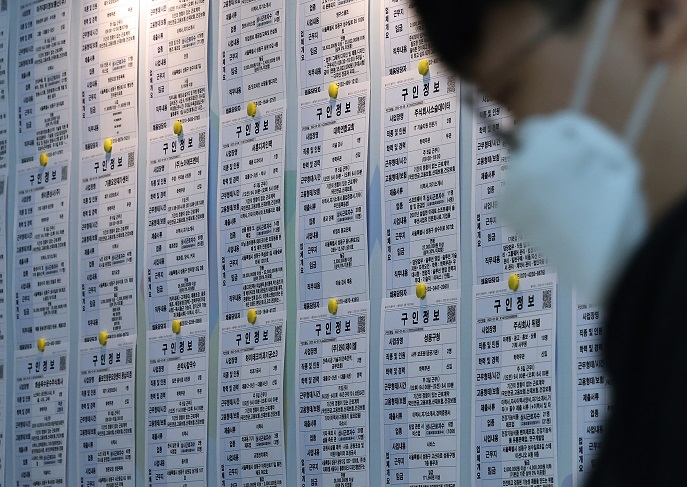 Last month, the number of daily COVID-19 cases shot up due to the fast spread of the omicron variant. South Korea’s new virus cases fell to 195,419 on Wednesday after hitting a record high of 621,179 on March 17.

The manufacturing sector, the backbone of the economy, reported an on-year increase of 100,000 job posts. It marked the largest gain since January 2018.

Finance Minister Hong Nam-ki said the number of employed people grew 1.27 million over the past five years despite a fall in the working-age population and the COVID-19 pandemic.

“In March, the country added more than 800,000 jobs on-year despite a high base effect. This shows the country has extended the strong momentum for the job recovery,” Hong wrote on his Facebook page.

The Bank of Korea (BOK) forecast the number of employed people to increase 280,000 this year, smaller than an on-year increase of 370,000 last year.

Experts said South Korea’s economic growth is expected to slow to the 2 percent range this year, while its inflation may shoot up near 4 percent amid soaring energy costs.

In February, the BOK maintained its 2022 growth outlook for Asia’s fourth-largest economy at 3 percent.

The central bank said inflation is likely to be under more upward pressure going forward, adding annual consumer prices are expected to top its 3.1 percent estimate.