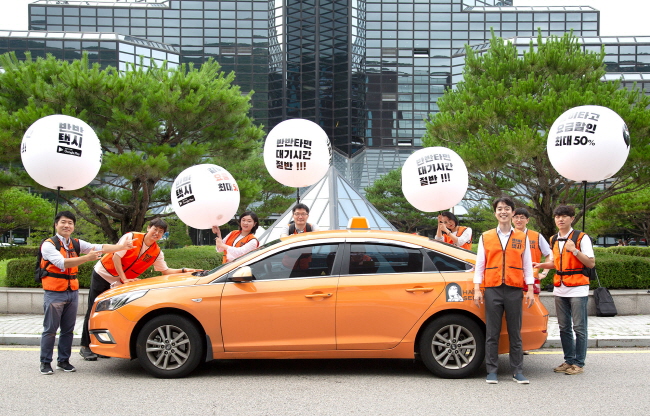 Banban Taxi is a mobile application-based service that matches passengers with similar routes so that passengers can share a ride. (image: Kornatus)

The Seoul Metropolitan Government (SMG) and the service’s operator, Kornatus, announced the launch of the “Banban (half-half in Korean) Taxi” service.

Banban Taxi is a mobile application-based service that matches passengers with similar routes so that passengers can share a ride.

It was designated as a special test subject for the government’s regulation sandbox on June 17 in order to ease the low boarding rate of late-night taxis.

Since then, the app’s operator, Kornatus, has completed the inspection of pre-conditions by the Ministry of Science and ICT after being approved by the SMG.

Banban Taxi automatically connects passengers willing to share a cab using the app, and also dispatches a taxi when a group is formed. This is different from the past when taxi drivers used to choose passengers.

Only passengers of the same gender are allowed to ride in the same direction, but only if the estimated time is less than 15 minutes.

Furthermore, the passengers have to be located within 1 kilometer, and have to share 70 percent of the ride.

The hours are from 10 p.m. to 4 a.m, and the service area is limited to 12 autonomous districts, including Gangnam-gu, where it is often difficult to hail a cab at night.

The fare will be split fifty-fifty depending on the distance of the ride, and the hailing fee will be paid separately.

Banban Taxi apps must be registered under one’s real name, and payment can only be made with a credit card. It also has a notification function to inform acquaintances of boarding and a self-seat designation function.

Through such measures, the city hopes to prevent any related crimes, and officials expect a reduction in passengers’ fare burden and an increase in taxi drivers’ income.