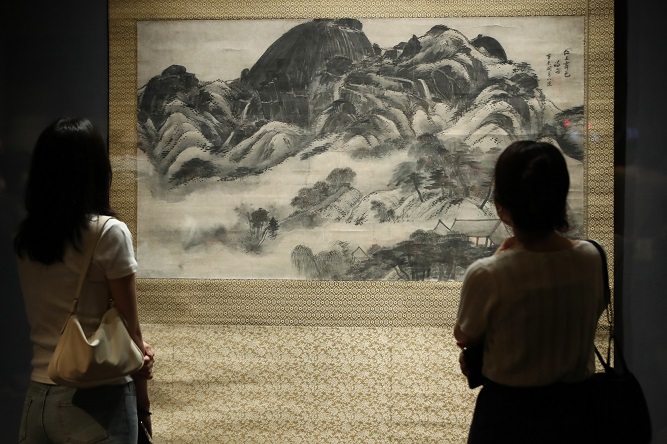 Visitors view Joseon era painter Jeong Seon’s “Clearing after Rain on Mount Inwang” at the exhibition “A Great Cultural Legacy: Masterpieces from the Bequest of the Late Samsung Chairman Lee Kun-hee” at the National Museum of Korea in Seoul on July 20, 2021. (Yonhap)

“A Great Cultural Legacy: Masterpieces from the Bequest of the Late Samsung Chairman Lee Kun-hee” and “Lee Kun-hee Collection: Masterpieces of Korean Art,” taking place respectively at the National Museum of Korea (NMK) and the Seoul gallery of the National Museum of Modern and Contemporary Art, Korea (MMCA), are the first two major exhibitions showcasing the collection.

The special exhibitions — which the government and the national museums said will continue in other forms going forward — focus on the works of Korean artists this time, with the oldest pieces dating back to the prehistoric era. 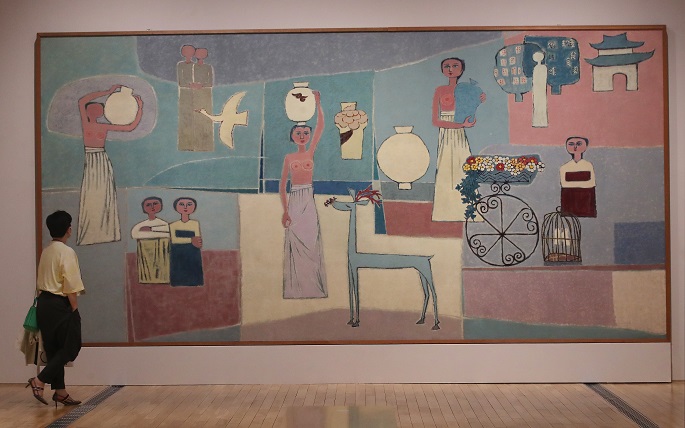 A visitor views painter Kim Whan-ki’s “Women and Jars” on display at the exhibition “Lee Kun-hee Collection: Masterpieces of Korean Art” taking place at the National Museum of Modern and Contemporary Art, Korea (MMCA) in Seoul on July 20, 2021. (Yonhap)

At the NMK in Seoul’s Yongsan Ward, 77 pieces of cultural artifacts — including metalcrafts, earthenware, porcelain, bibliographic materials, calligraphy, paintings and wooden furniture — are on view.

While all the pieces have been unveiled to the public through one exhibition or another, museum officials said what makes this exhibition special is curating them at one venue and offering videos and digital explanations for added depth.

“They have all been on display before and are very famous works,” Lee Su-kyung, a curator at the museum, told reporters in a press preview Tuesday. “Our goal is to show their value in a good environment through rich and detailed references.”

NMK officials picked Jeong Seon’s landscape painting as one of the most valuable artworks at the exhibition.

While it is disputed whether the Joseon-era painter drew the mountain landscape for a sponsor or an ailing friend, its exquisite details have made it National Treasure No. 216.

While Mount Inwang — which still sprawls across Jongno Ward in modern-day Seoul — was not a treasured mountain back then, the landscape painter depicted the peak with an affectionate view that captures the details of the mountain that still remain today. 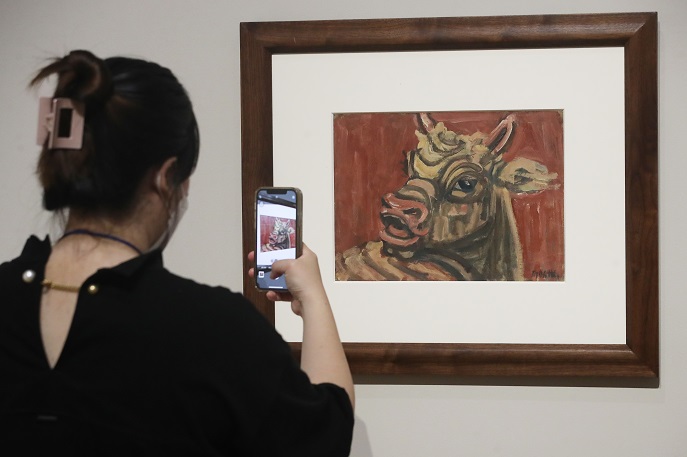 The MMCA exhibition, meanwhile, focuses on modern paintings and sculptures by Korean artists.

The exhibition, which showcases 58 works by 24 artists, is divided into the three sections of “Adoption and Transformation,” “Shows of Individuality” and “Setting Down Roots and Seeking New Avenues.”

The first section zooms in on how Korean artists adapted to historic changes, like Japan’s 1910-45 occupation of the Korean Peninsula, and took in influences by Western artists to fuse them with traditional styles through Baik Nam-soon’s “Paradise” and Lee Sang-beom’s “Peach Blossom Spring (1922).”

“Shows of Individuality,” which focuses on masters of South Korean art, is the gem of the art exhibition that showcases key works of painters like Kim Whan-ki, Yoo Young-kuk, Park Soo-keun and Lee Jung-seop.

The painting, which measures 2.81 meters in height and 5.67 meters in length and is characterized by its pastel tones and natural lines, is seen as representing the artist’s love for Joseon porcelain.

Lee Jung-seop’s “Bull” (1950s), a subject the ill-fated artist was mesmerized by throughout his life, and Park Soo-keun’s “Woman Pounding Grain” (1954) are also pieces that should not be missed. 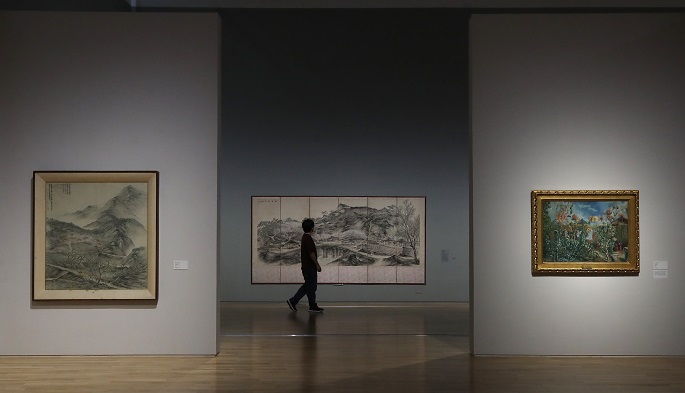 A visitor is seen at the exhibition “Lee Kun-hee Collection: Masterpieces of Korean Art” taking place at the National Museum of Modern and Contemporary Art, Korea (MMCA) in Seoul on July 20, 2021. (Yonhap)

The exhibitions come roughly three months after Lee’s family and the culture ministry announced the donation of around 23,000 art pieces, including masterpieces by Korean and Western artists, such as Kim Whan-ki, Claude Monet and Salvador Dali.

The senior Lee, considered to have owned the biggest collection of South Korea’s national treasures among individuals, was especially fond of antique artworks.

Tickets to both exhibitions are free of charge but reservations should be made in advance due to Level 4 social distancing guidelines in place in the greater Seoul area. Both institutions release new slots at midnight, but most tickets have sold out.

The two museums plan to hold another large-scale exhibition in April next year to mark the first anniversary of Lee’s massive donation.