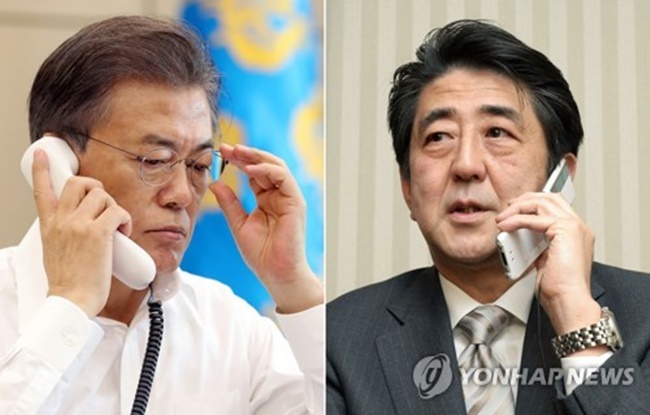 The renewed call came in a telephone conversation made by the South Korean leader to congratulate Abe on the outcome of the recent election in Japan. (Image: Yonhap)

The renewed call came in a telephone conversation made by the South Korean leader to congratulate Abe on the outcome of the recent election in Japan.

Abe’s ruling Liberal Democratic Party won 284 seats out ofthe total 465 seats at the House of Representatives, the lower house of the Japanese Diet, in the Oct. 22 snap election.

“I believe the people’s will, confirmed in the election, will be a great driving force in pursuing your policies,” Moon told Abe, according to the presidential office Cheong Wa Dae.

Abe noted he had stressed the need to encourage North Korea to change its own behavior while campaigning for the election.

“This was to highlight the fact that North Korea and its people may enjoy prosperity if the country makes the right policy decision because the country has abundunt resources and its people are also diligent,” the Japanese leader said, according to Cheong Wa Dae spokesman Park Soo-hyun.

Also, the two leaders agreed to continue their countries’ bilateral cooperation, as well as their trilateral cooperation with the United States, to resolve the North Korean nuclear issue and establish peace on the Korean Peninsula, Park said.