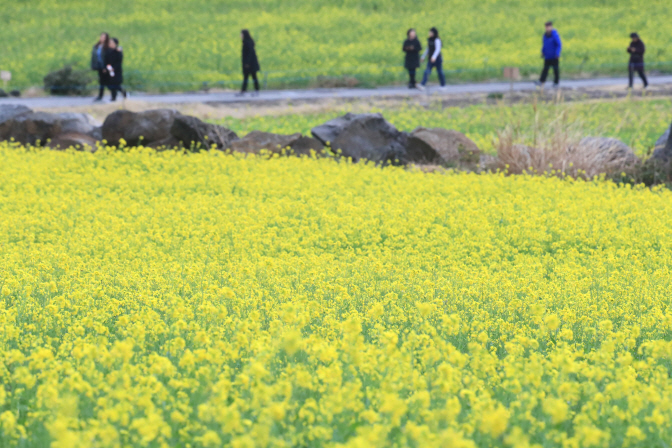 Yuchae(Canola) flower are in full blossom on Jeju Island on Jan. 7, 2020, as the island’s daily high temperature rose to 23 C. (Yonhap)

The average monthly temperature across the country was 2.8 C last month, the highest number for a January since the Korea Meteorological Administration started to operate its nationwide weather observation network in 1973, according to the agency.

The figure was 3.8 degrees higher than the average January temperature recorded in the period of 1981-2010.

Also last month, the average daytime high was 7.7 C and the average overnight low was minus 1.1 C, both the highest on record.

The unprecedentedly warm weather last month is attributable to the unusual dearth of the Siberian anticyclone that used to envelop the Korean Peninsula every winter in a cold and dry climate.

It was after the island posted an unprecedentedly warm December, when the average monthly temperature came to 10.2 C, the second highest number since 1961 when the weather agency began compiling weather records on the island.