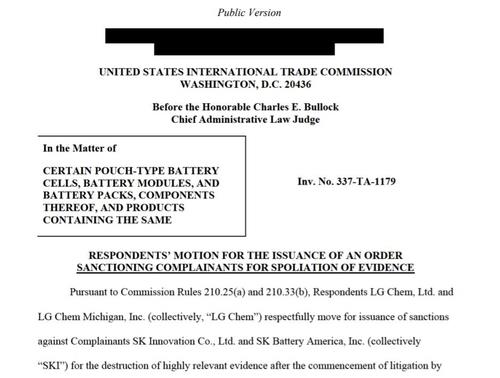 SEOUL, Sept. 2 (Korea Bizwire) – LG Chem Ltd. has filed a motion with a U.S. trade panel, seeking the issuance of an order sanctioning its rival SK Innovation Co. ahead of a crucial verdict over their electric vehicle (EV) battery patent case.

On Friday, LG Chem said in a motion filed with the U.S. panel that SK Innovation’s “spoliation was targeted to the destruction of relevant LG Chem information” in SK Innovation’s possession.

LG Chem also said SK Innovation employees were repeatedly instructed to “delete every material related to the rival company … and delete this email after completing this directive.”

LG Chem has said that it can settle the dispute with SK Innovation over their EV battery trade secret case in the U.S. if SK Innovation offers a “reasonable level” of compensation on an objective basis.

In February, the U.S. International Trade Commission made a preliminary ruling in favor of LG Chem’s argument that SK Innovation had misappropriated and used its EV battery trade secrets.

The U.S. trade panel is set to give its final ruling on the case in October.