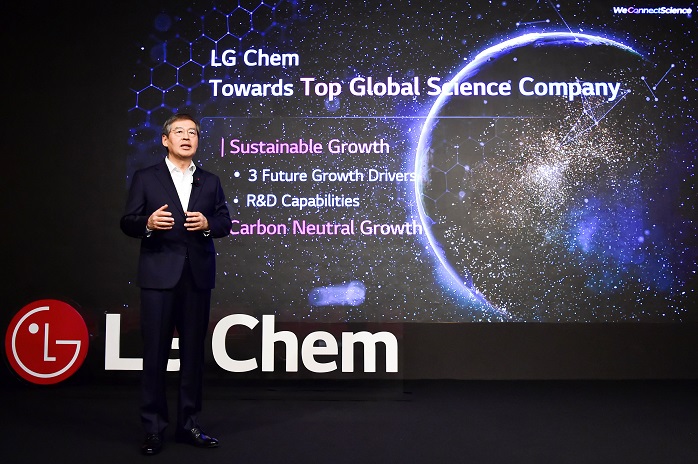 LG Chem CEO Shin Hak-cheol delivers a presentation on the company’s mid-to long-term business plans toward 2030 during an online session, in this photo provided by the company on Feb. 8, 2022.

SEOUL, Feb. 8 (Korea Bizwire) — LG Chem Ltd., South Korea’s leading chemical maker, said Tuesday it aims to more than double its revenue to 60 trillion won (US$50.1 billion) by 2030 as it accelerates its push for a green transition with a focus on sustainable materials and battery components.

Unveiling its mid- to long-term business plans, LG Chem said it is eyeing annual sales of 40 trillion won by 2026.

The 2030 sales target represents over a 130 percent increase from last year’s revenue of 26 trillion won. It excludes that from the battery-making unit LG Energy Solution Ltd, which was spun off last year.

The company will aim to generate 30 trillion won in sales by 2030 from its three core businesses — recycling, biodegradable and renewable energy materials, battery materials and pharmaceuticals.

“We will transform into a global scientific company whose core business pillars center on eco-friendly businesses, battery materials and new drugs and continue to grow unwaveringly in any business environment,” LG Chem CEO Shin Hak-cheol said in a livestreamed session on the future business plan.

For its eco-friendly business, Shin referred to plastic recycling, biodegradable materials and energy transition as three main areas the company will focus on over the coming years.

The battery materials sector aims to generate 21 trillion won in sales, as it expects solid growth in the production of cathode materials, such as the next-generation carbon nanotube, and battery separators.

LG Chem said it will work to bolster growth in the new drug business, with a focus on anticancer and antidiabetic treatment.

LG Chem also plans to increase its research and development (R&D) budget by 35 percent to 1 trillion won this year.

LG Chem set the annual sales target at 27 trillion won for this year, up 4 percent from last year. The figure excludes the 19.2 trillion-won target set for LG Energy Solution.

In the fourth quarter, LG Chem swung to the black from a year earlier, posting 336.8 billion won in net income, compared with a loss of 343.4 billion won.

Operating profit reached 748.4 billion won for the October-December period, more than sixfold from a year ago. Sales rose 23 percent to 10.94 trillion won.

The operating profit was 22.6 percent lower than the average estimate, according to the survey by Yonhap Infomax, the financial data firm of Yonhap News Agency.

For all of 2021, the company booked a combined 3.95 trillion won in net profit, growing nearly sixfold from the previous year.

The operating income came to 5.02 trillion won, while the annual sales stood at 42.65 trillion won.

Shares in LG Chem fell 3.44 percent to end at 617,000 won on the main Seoul bourse on Tuesday, underperforming the broader KOSPI’s 0.05 percent gain. The earnings results were released after the opening bell.