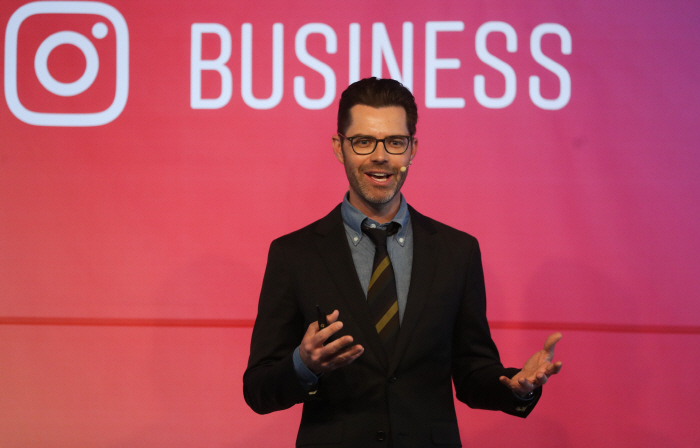 Instagram Vice President Jim Squires speaks to reporters in Seoul on May 7, 2019. (Yonhap)

SEOUL, May 7 (Korea Bizwire) — An increasing number of South Koreans connect with brands on photo and video-sharing platform Instagram to find products and services, its vice president said Tuesday.

“More than 60 percent of local users associate Instagram as a platform for interacting with brands, and they had positive perceptions on branded contents,” Instagram Vice President Jim Squires told reporters in Seoul. He cited a survey conducted by its parent company, Facebook Inc., on 2000 heavy Instagram users in the country.

It is now a common trend in the e-commerce industry for both big-name companies and entrepreneurs to advertise their products and service on their Instagram accounts as users are often redirected to the brand’s websites for actual purchases, he said.

The survey showed that 85 percent of local users searched for information on a certain product on Instagram, and 63 percent had the experience of visiting a brand’s website or application linked to the Instagram accounts.

Noticeably, the survey showed that 35 percent of the respondents made actual purchases of products or services after discovering them on the platform.

“I have high expectations for a continuous growth of Instagram in Korea,” he said, adding that 51 percent of Korean users surveyed answered that they used Instagram more than they did a year ago.

In 2016, Instagram also introduced Stories — a Snapchat-like feature that creates photo and video sequences that disappear within 24 hours — allowing marketers to more easily interact with users.

“With the use of Stories having increased by more than 50 percent year-on-year as of last December, Stories can also be considered an effective way to communicate closely with customers by sharing casual contents,” he said.

The survey also showed that 58 percent of users preferred to see content that informs them of new trends, followed by 48 percent saying they look for sneak previews of events for product launches.

In March, Instagram announced that it would begin testing in-app shopping with about 20 retail partners, including fashion giant Zara, in the United States. The new feature allows users to shop and directly buy items via the Instagram app without leaving the platform.

“The feature streamlines the purchasing experience for users,” he said, without further revealing the exact plan on whether to adopt such a feature in South Korea.

The vice president also mentioned the misconception that only young people use Instagram in the country, citing the survey in which 15 percent of the respondents aged over 55 used the platform multiple times a day.