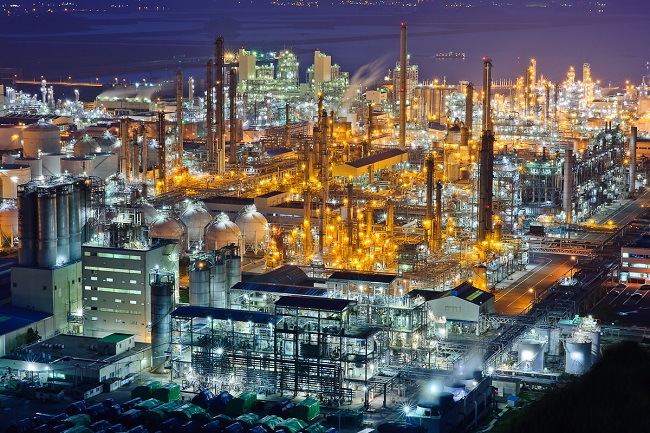 LG Chem Ltd.’s petrochemical factory in Yeosu, 455 kilometers south of Seoul, is seen in this file photo provided by the company on Nov. 7, 2020.

Its annual sales rose 9.9 percent to 30.6 trillion won (US$278.6 billion) in 2020, surpassing the threshold for the first time, the company said in a regulatory briefing.

“In 2020, both the company’s sales and profits grew despite the COVID-19 pandemic,” Chief Financial Officer Cha Dong-seok said in a conference call.

“In the fourth quarter, the company successfully launched its battery division to strengthen its growth competitiveness.”

In the fourth quarter, LG Chem said its net profit came to 60.6 billion won, turning from a loss of 56.8 billion won a year earlier.

Operating profit reached 673.6 billion won in the October-December period, also swinging from a loss of 33.4 billion won a year ago, which was largely due to one-off costs related to energy storage systems (ESS).

LG Chem said it aims to generate 37.3 trillion won in sales in 2021 by focusing on its core businesses, including petrochemicals, materials, batteries and health care.

The company said it will develop new materials for batteries and expand production capacity to meet growing demand for EVs, OLED screens, IT products and materials for e-mobility.

Company officials said LG Energy Solution’s revenue is expected to jump over 50 percent this year as major countries are expanding subsidies for EVs and renewable energy solutions, which would require ESS for stable power supply.

“To grow beyond a battery supplier, the company will develop next-generation batteries and establish a value chain to provide various solutions,” Jang Seung-se, a senior vice president at LG Energy Solution, said.

The battery maker is expected to be listed on the stock market to secure funds for production capacity expansion, but company officials did not elaborate on its initial public offering plan.

Shares in LG Chem fell 2.83 percent to 928,000 won on the Seoul bourse, underperforming the broader KOSPI’s 0.57 percent slide. The earnings results were released after the market closed.