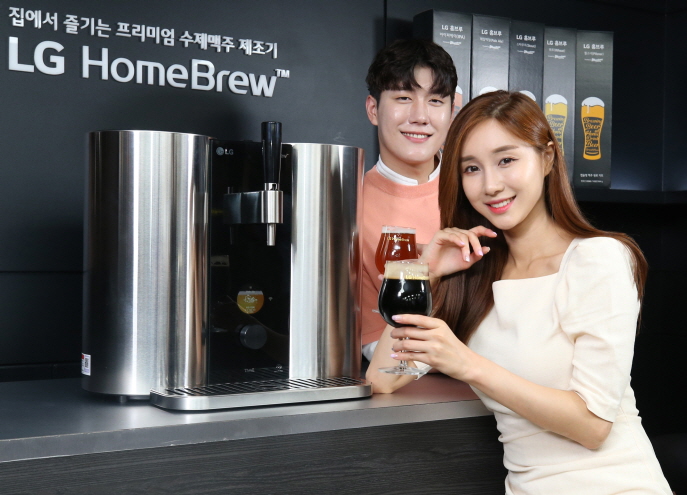 Brewing beer has been considered a hobby with a high barrier to entry because brewers should keep a close eye throughout the process, ranging from boiling, mixing, cooling and carbonating.

The beer then needs to be stored at the right temperature to ferment for several weeks depending on the type of the malt.

LG HomeBrew, first unveiled at the Consumer Electronics Show in January, is now coming to the South Korean market at a price tag of 4 million won (US$3,389), including a three-year care solution for cleaning and regular filter changes.

A rental service is also available, and the price varies depending on the payment options.

About the size of a large espresso machine, the pricey gadget makes beer out of capsules containing malt, yeast, hop oil and flavors.

Its algorithm controls temperature and pressure to maintain a stable quality of beer, and the machine cleans itself after dispensing.

It takes about two to three weeks to make 5 liters of beer, and users can monitor the beer’s status via a smartphone app.

LG Electronics said the capsule-based beer maker is targeted at those who want to drink freshly brewed beer according to their own tastes, considering the costs and time needed to make beer.

“I think beer enthusiasts who want to drink their unique beer with their friends in their own space may be interested in Home Brew.”

The embassy, which has a British style pub in a hall, was allowed to hold the event as it was under extraterritorial jurisdiction, the company said.

The biggest challenge will be how to market the expensive machine in the domestic market, Song said, hoping word-of-mouth among early adopters will promote it in the initial stage.

“Because LG Electronics doesn’t have a license to sell alcohol, we’re limited in promoting the freshly brewed beer through tasting events,” Song said.

“I hope bloggers and those who taste the beer actively share their experiences with others to promote it.”

The South Korean firm said it will push for launching the beer machine in the global market next year based on feedback from the domestic market.

“The U.S. may be the next market after South Korea,” Song said. “We have a showroom in Napa Valley and have been holding various events to get feedback and to see how to improve its function.”