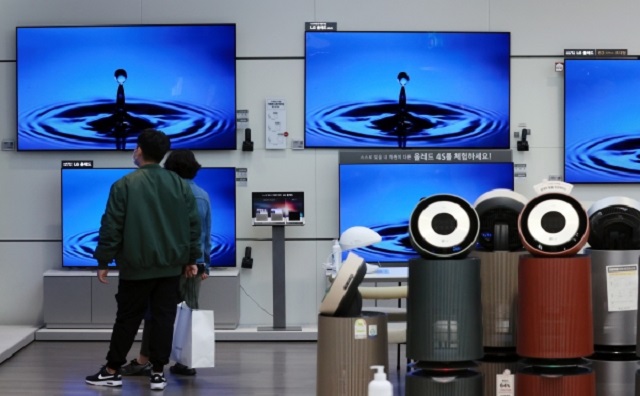 OLED televisions by LG Electronics Co. are on display at an electronics store in Seoul on Oct. 12, 2021. (Yonhap)

SEOUL, Jan. 27 (Korea Bizwire) — LG Electronics Inc. on Thursday said its operating profit fell 21 percent in the fourth quarter from a year earlier due to a hike in logistics and raw material costs and weaker-than-expected holiday spending on home appliances.

Operating profit slumped to 677.7 billion won (US$563 million) in the October-December period, it said in a regulatory filing.

Operating profit was lower than the market consensus of 813.7 billion won in a survey by Yonhap Infomax, the financial data firm of Yonhap News Agency.

But its sales reached a record quarterly high of 21.01 trillion won for the three months ended in December, up 20.7 percent from a year earlier, helped by its strong home appliance business.

Sales of its home entertainment unit came to 4.99 trillion won, up 16.4 percent from a year ago thanks to the growth in demand for premium OLED and large-screen TVs in key European and North American markets.

While the company did not provide the exact shipments of OLED TVs last year, it said it surpassed its sales target by 60 percent in the fourth quarter. For the whole year, the company shipped twice as many OLED TVs as it did the previous year.

It said it will “continue keeping the growth momentum by launching improved new models and leveraging our dominant position in the market,” as “demand for premium products will remain robust.”

Its vehicle component solutions unit, considered to be LG’s next growth engine, however, continued to log an on-year operating loss, weighed down by pandemic-caused business uncertainties and the global chip shortage.

The unit reported 1.68 trillion won in sales, down 12.3 percent from a year ago. 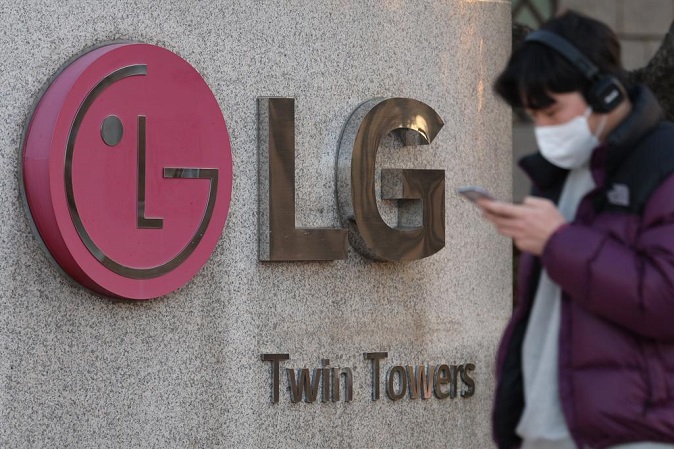 A man passes by the LG Electronics headquarters in Yeouido, Seoul, in the Jan. 7, 2022, file photo. (Yonhap)

LG’s business solutions division, in charge of IT devices, solar panel modules and robots, posted an operating loss of 35.1 trillion won, as a rise in the cost of logistics coupled with a slowdown of solar module sales offset strong demand for premium PCs and gaming monitors, the company said.

The company said it was working to save logistics costs by “improving the efficiency of transportation, implementing activities, such as mixed loading and maximization of container utilization rate, and expanding direct shipment.”

Amid the ongoing business uncertainties with the prolonged COVID-19 pandemic and accelerated tapering in the U.S., the tech giant said it was “closely monitoring the growth trends in each region and developing a growth strategy to maximize sales with a focus on premium products and products with large capacity and high efficiency.”

In the short term, risks associated with the chip shortage and production disruptions are expected to continue to put upward pressure on cost, the company said, and profitability improvement is expected to be limited this year.

For the full year of 2021, the tech company hit a record high of 74.72 trillion won in sales, up 28.7 percent from the previous year, taking over Michigan-based Whirlpool Co. to become the world’s biggest home appliances maker.