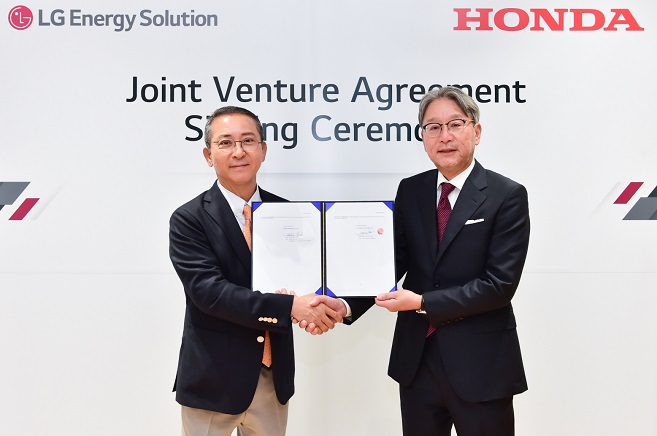 LG Energy Solution CEO Kwon Young-soo (L) poses for a photo with Honda Motor CEO Toshihiro Mibe during the signing ceremony in Seoul on Aug. 29, 2022, for their joint venture to build an electric vehicle plant in the United States, in this photo provided by LGES.

The two companies signed the binding agreement for the 5.1 trillion-won (US$4.4 billion) joint venture to build the production facility with an annual capacity of 40 gigawatt hours, LGES said in a release.

The location of the plant has yet to be decided.

The plant will manufacture pouch battery cells and modules starting late 2025, and the output from the plant will be mainly supplied for Honda’s premium Acura EV models, LGES said.

LGES, the world’s second-largest battery maker, is pouring in more than 20 trillion won to boost its production capacity in North America.

It has formed joint ventures with U.S. General Motors Co. and the Chrysler parent, Stellantis N.V., to produce and supply the EV batteries.

LGES is also pushing to expand its existing standalone factory in the U.S. state of Michigan and weighing the plan to build its second standalone cylindrical battery plant in Arizona, after it said it was reassessing the project amid rising costs.

Honda, the sixth-highest selling carmaker in North America, has unveiled a plan to invest 5 trillion yen ($40 billion) for electrification with an aim to sell over 2 million EVs by 2030.