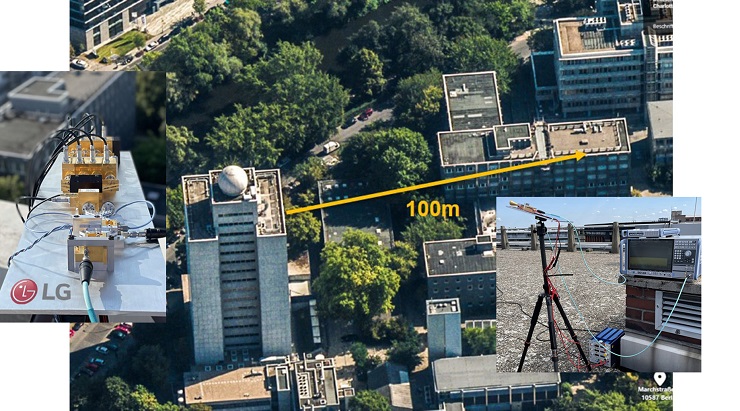 This photo provided by LG Electronics Inc. on Aug. 19, 2021, shows the company’s demonstration of 6G terahertz wireless communication in Berlin.

LG said it developed a new power amplifier with Fraunhofer-Gesellschaft in order to deliver stable communication signals at the 6G terahertz spectrum.

The ultrawide band spectrum has a short frequency coverage range, while power losses in antenna transmitting and receiving processes are severe, demanding enhanced power amplifiers to solve such problems.

LG said its new amplifier can deliver a maximum output signal of 15 decibel-milliwatts for stable communication in the 155-175 gigahertz band.

LG expects 6G communication to be commercialized in 2029, with talks for standardization beginning in 2025.

The company believes the next-generation telecommunications network can provide faster data speed, lower latency and higher reliability than 5G, and will be able to bring the concept of Ambient Internet of Everything (AIoE), which provides enhanced connected experiences to users.

LG established a 6G research center with KAIST in 2019 and signed an agreement with the Korea Research Institute of Standards and Science last year to study 6G technologies.

In June, the company’s principal researcher was elected the chair of the applications working group in the Next G Alliance, a North American mobile technology alliance for 6G solutions development.