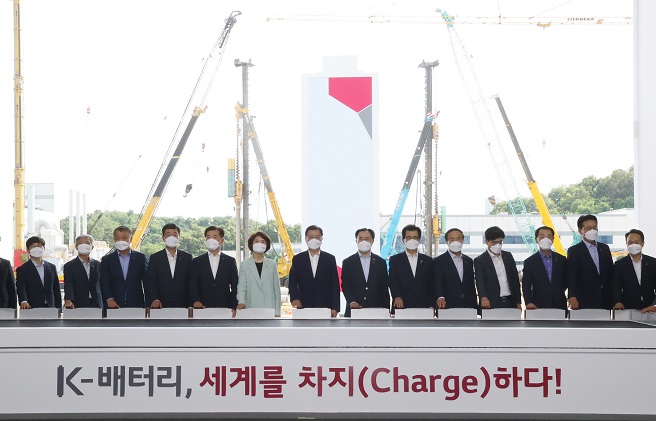 President Moon Jae-in (7th from L) and other participants break ground for a rechargeable battery test and research center at an LG Energy Solution plant in Cheongju, 140 kilometers south of Seoul, on July 8, 2021. (Yonhap)

LG revealed the large-scale investment plan in tune with the government’s announcement of K-battery bluemap aimed at bolstering the nation’s rechargeable battery business by expanding R&D spending and tax incentives.

LG Energy, the world’s No. 2 battery supplier, said it has so far secured 180 trillion won worth of EV battery orders from global automakers and will further strengthen its battery leadership with additional investment.

The firm is a major supplier of batteries for nearly all major global carmakers, including Tesla, General Motors, Ford, Renault, Volvo and Volkswagen, as well as South Korea’s two largest automakers — Hyundai Motor and Kia Corp.

LG Energy said it will upgrade its manufacturing process at its Ochang plant, 120 kilometers south of Seoul, to make it flagship “smart factory” by 2023 and apply the knowhow in other factories.

“We will secure intellectual properties by closely integrating the battery R&D and advancing the manufacturing capacity to apply them in overseas factories,” LG Energy CEO Kim Jong-hyun said during a groundbreaking event for a battery research and testing center at Ochang factory.

One thought on “LG to Invest 15 tln Won in S. Korea by 2030 to Solidify Battery Leadership”