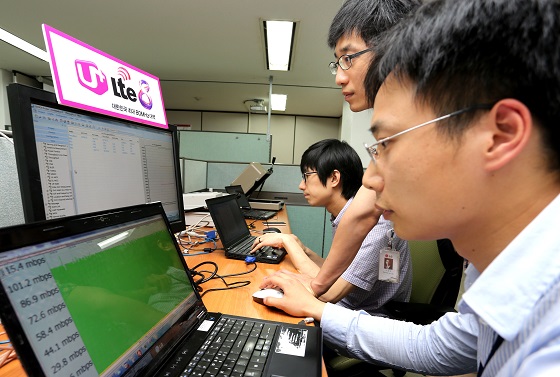 Once this CA technology is commercialized, smartphone users will be able to upload an 800-MB movie file in 64 seconds and store on the cloud server up to 150 5-MB high-quality photos in one minute.(image:LG Uplus)

SEOUL, June 19 (Korea Bizwire) – Ahead of the nationwide deployment of broadband LTE-A service, LG Uplus has successfully developed the world’s first Uplink Carrier Aggregation technology that provides four times faster upload speed than LTE. The company said on June 18 that it has completed the pilot run on the uplink CA technology with an upload speed of more than 100 Mbps by combining 2.6-GHz broadband frequency with 800-MHz LTE nationwide network frequency.

Comparing to the upload speed of up to 25 Mbps with the bandwidth of 10 MHz under the current LTE service, the new uplink Carrier Aggregation can offer up to 100 Mbps by adding the 20-MHz broadband and 10-MHz LTE bandwidth.

Once this CA technology is commercialized, smartphone users will be able to upload an 800-MB movie file in 64 seconds and store on the cloud server up to 150 5-MB high-quality photos in one minute. Currently it takes 4 minutes and 16 seconds to upload the same-size movie file on the LTE network.

The development of the CA technology by LG Uplus is meaningful not just because the company has succeeded in developing a new technology but also because it has upgraded the level of Korea’s mobile telecom technology commensurate with the nation’s status as the world’s best IT country.

The company plans to complete the standardization of the CA technology by September this year by proposing it to the 3rd Generation Partnership Project (3GPP).

Choi Taek-jin, LG Uplus head of the SD Technology Strategy Unit, said, “LG Uplus has so far led the market in the competition for LTE technologies and it will do the same for the next-generation LTE network technologies as well. Following the commercialization of the world’s first three-band CA network, we will open the era of 300-Mbps download and 100-Mbps upload speed through uplink CA.