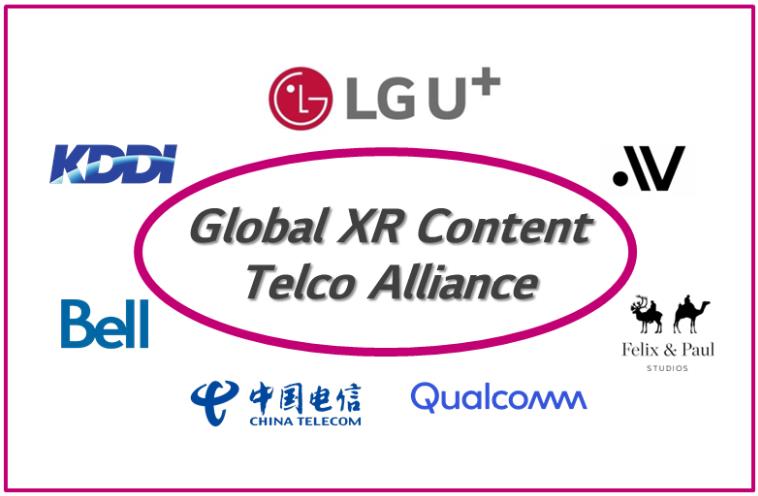 This photo, provided by LG Uplus on Sept. 1, 2020, shows the logos of LG Uplus Corp. and other global firms of an alliance for augmented reality content.

The Global XR Content Telco Alliance will collaborate on developing 5G-based extended reality (XR) content, which covers all immersive content such as AR and VR, according to a statement from LG Uplus.

The alliance includes Japan’s KDDI Corp., China Telecom Corp., Bell Canada and Qualcomm, and it will be headed by LG Uplus at launch. Global VR developers such as Canada’s Felix & Paul Studios and France’s Atlas V will also join the alliance as content partners.

The group said it will release a VR series on the International Space Station in November, which will be shot in space and feature a space walk, by working with the U.S. National Aeronautics and Space Administration (NASA).

LG Uplus added that it plans to produce more immersive content, such as concerts and documentaries on athletes.

“The core of the XR alliance is joint funding,” said Choi Yoon-ho, LG Uplus vice president, in a press briefing. “We want to find and produce good quality content so that the entire ecosystem expands.”

The mobile carrier will first release the content on its mobile app and plans to expand its availability to more devices, according to a company spokesperson.

The alliance’s launch comes as LG Uplus has recently focused on strengthening its AR and VR business with global partners.

Last month, the mobile carrier released a 5G-based AR glasses device with Chinese mixed-reality developer Nreal, and it has partnered with Google to develop AR and VR content since last year.