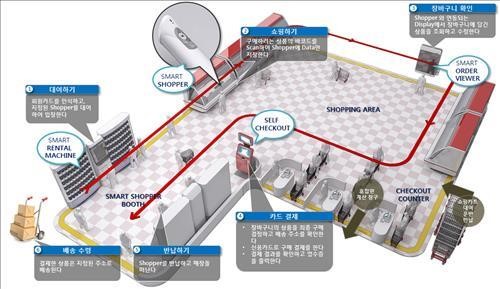 The Smart Shopper provides users with barcode-based scanners as they enter the store, with which they can buy items displayed on shelves simply by scanning the barcode. (image: SK Telecom)

SEOUL, Feb. 25 (Korea Bizwire) — SK Telecom Co., South Korea’s top mobile carrier, said Wednesday it will roll out a smart shopping platform and its related devices at the Mobile World Congress (MWC) to be held in Spain early next month, as it seeks to tap deeper into the online-to-offline (O2O) payment business.

The Seoul-based telecom company will showcase Smart Shopper, a shopping platform that mainly allows users to make cart-free purchases at retail stores, during the four-day exhibition set to kick off March 2 (Spain time) in Barcelona.

The Smart Shopper provides users with barcode-based scanners as they enter the store, with which they can buy items displayed on shelves simply by scanning the barcode.

The users can check the items placed in the order list before making a payment through the “self checkout.” The purchased items will then be delivered to the users’ homes.

SK Telecom said the device “not only enables them to reduce the size of the stores for retailers but also relieves the burden for shoppers” of having to carry large bags in their hands or push carts down aisles.

The company plans to commercialize the Smart Shopper on home turf within this year, starting with large retail chains, it added.

The card comes with a dozen touch-sensitive buttons on the front side, allowing users to select which credit card he or she wants to use.

On the sidelines of the display, SK Planet, an online platform operator affiliated with SK Telecom, plans to showcase Shopkick, its O2O platform that provides users with product and discount information of nearby stores.

SK Planet said it is planning to expand sales of Shopkick to Europe, starting with Germany. It has so far joined hands with some 200 global retailers, including Macy’s and L’Oreal, to provide Shopkick to their customers.