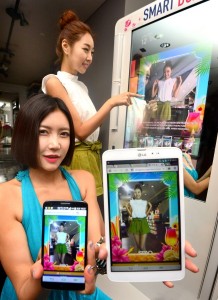 “Uplus Board” is a first such attempt in the fashion industry that combines mirror display, camera ads, and the LTE-based Internet of Things (IoT) together with SPAO. (image: LG Uplus)

SEOUL, June 13 (Korea Bizwire) – With an integrated technology of fashion and telecommunications, a groundbreaking change is expected in cloth purchasing patterns in which customers try on at shops and buy them.

LG Uplus announced on June 12 that it has introduced “Uplus Board” the first such attempt in the fashion industry that combines mirror display, camera ads, and the LTE-based Internet of Things (IoT) together with SPAO.

The Uplus Board, a touchable multimedia device based on IoT technology, enables customers to have a 360-degree view of themselves while trying on clothes and send or print the photos of them with an embedded camera.

The No. 3 mobile carrier in Korea installed the Uplus Board in the flagship store of SPAO, a casual SPA brand run by E-Land Group and began conducting test operations from that day.

The Internet of Things (IoT) refers to uniquely identifiable objects and their virtual representations in an Internet-like structure. The term Internet of Things was proposed by Kevin Ashton in 1999though the concept has been discussed since at least 1991.The concept of the Internet of Things first became popular through the Auto-ID Center at MIT and related market analysis publications.Radio-frequency identification (RFID) was seen as a prerequisite for the Internet of Things in the early days. If all objects and people in daily life were equipped with identifiers, they could be managed and inventoried by computers.Besides using RFID, the tagging of things may be achieved through such technologies as near field communication, barcodes, QR codes and digital watermarking. (Wikipedia)

Customers visiting the shop can check the fit of the clothing items they wear and share the photos on their SNS accounts instantly. Also, through the mirror display, they can find out various events or promotions of the store, suggested coordination of the clothes, or style suggestions of the month.

The most distinguished feature of the Uplus Board is the 360-degree camera function. The 3- megapixel camera with continuous shooting function enables customers to check their back and side fit of the clothes by turning around in front of the camera.

Besides, equipped with the LTE module, customers can share the photos of themselves trying on the clothes with their friends through SNS or email. Through the function, they can get feedbacks about the clothes from their friends.

In celebration of the installation of the Uplus Board, SPAO is holding an event printing photos with SPAO models on the spot.

With the appearance of the fashion board, a change is expected in the cloth purchasing patterns of visiting shops and trying on the clothes before real purchase. Also, it is expected to accelerate the trend using ICT technology including IoT in the fashion industry.

An official at LG Uplus said, “We will add new features in the board like virtual fitting solutions which will enable customers can check the fit without trying on the clothes and raise the customer satisfaction of the board.”