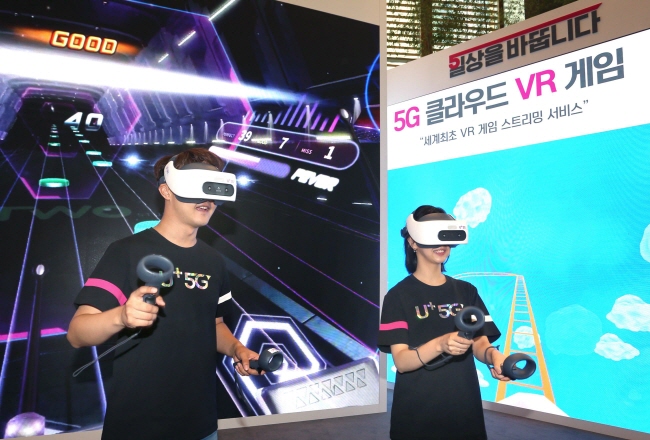 The nation’s No. 3 mobile carrier said it will launch a wide range of VR games for head-mounted displays connected to its 5G network in partnership with other developers.

The company said it will establish VR game experience zones in 50 stores this month and increase the number to 90 nationwide by the end of this year.

“We will expand the cloud-based gaming service, which can take full advantage of 5G, and commercialize the services by the year-end based on customer feedback,” Kim Jun-hyung, 5G service group vice president at LG Uplus, told reporters.

Cloud gaming promises to make it easier for consumers to play online games via real-time streaming from data centers, sidestepping the need to buy expensive PCs or download games.

Global tech players, including Google, Microsoft, Amazon and Apple, have been looking to deliver games via the cloud to gain an early lead in the burgeoning market.

Since the commercial rollout of 5G in April, local telecom operators have been focusing on developing mobile gaming and immersive content, such as virtual reality and augmented reality, to provide differentiated services for premium users.

The global cloud gaming market is expected to grow from $234 million in 2018 to $2.5 billion by 2023, according to market researcher IHS Markit.