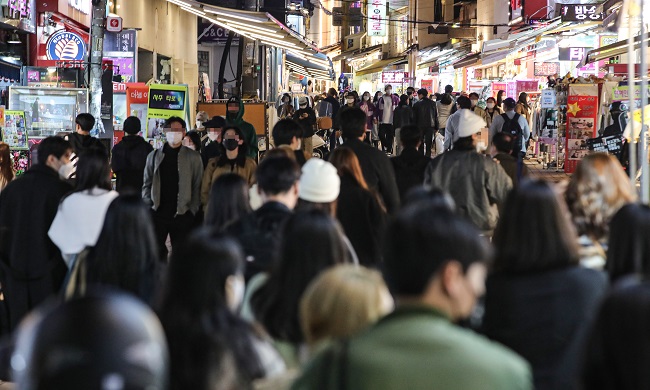 The average life expectancy at birth in 2020 was 2.4 months longer than a year earlier, according to the data compiled by Statistics Korea.

Compared with 10 and 20 years ago, the average life expectancy became 3.2 years and 7.5 years longer, respectively.

The reading also marked a sharp rise from 62.3 years in 1970, when the agency began compiling related data. In 2009, the life expectancy hit 80 years for the first time.

Baby boys and girls born in 2020 are expected to live 80.5 years and 86.5 years, respectively. The gender gap in life expectancy remained unchanged at six years for the second straight year.

South Korea’s life expectancies for men and women are 2.6 years and 3.3 years longer, respectively, than the average of the 38 member states of the Organization for Economic Cooperation and Development (OECD).

Of the OECD members, the average life expectancy of South Koreans at 83.5 years was the second longest after Japan with 84.7 years. The 2020 standing for South Korea was up three notches from 2019.

For those aged 60 last year, men are expected to have 23.4 remaining years for their life expectancy, while women have 28.2 years more.

The statistics agency said babies born in 2020 have a 20.7 percent chance of dying of cancer in the future, followed by heart disease with 11.7 percent and pneumonia with 9.1 percent.

The chance that a person could die of cancer in the future stood at 26.4 percent for male babies and 15.9 percent for female babies, according to the data.

If the risk of death from cancer is excluded, the life expectancies of male and female babies go up 4.5 years and 2.7 years, respectively.

South Korea is struggling with a continued decline in childbirths, as many young people delay and give up on getting married or having babies amid a prolonged economic slowdown and skyrocketing housing prices.