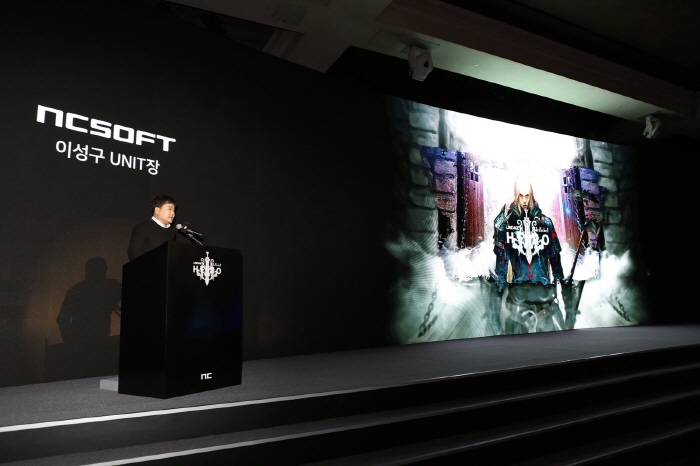 Lee Sung-gu, a managing director at NCSOFT Corp., speaks during a press conference in southern Seoul on Feb. 22, 2019, to announce the latest updates to the company’s mega-hit mobile game, “Lineage M.” (Yonhap)

The so-called master server will be adopted for the massively multiplayer online role-playing game (MMORPG) starting for the first time in March so that more users can enjoy the mobile version of “Lineage,” the company said.

NCSOFT said some 160 servers are to be added so users can simultaneously engage in battle, compared with conventional mobile games that only allow a limited number of players to be online at the same time.

“Our goal is to allow users to be completely freed from both time and space limitations,” Lee Sung-gu, a managing director at NCSOFT, told reporters.

Lineage M — which features a high degree of visual resolution yet brings back the classic game by featuring role-playing scenes — has become the most popular app both on the Google Play Store and Apple’s App Store since its launch in 2017 in South Korea and Taiwan.

NCSOFT said users can now play the Lineage M without actually linking to the game by upgrading autonomous hunting play environment for users, they said.

New characters, hunting grounds and monsters will also be upgraded for the new episode “Eclipse,” which users began to pre-register earlier in the day, officials said.

NCSOFT said it will update the game so that less time is required for users to upgrade their level, as part of its efforts to lower hurdles for newcomers.

The company earlier announced that it will launch Lineage M in Japan during the first half of this year, much later than industry forecasts.

“Localization is taking some time,” said Sim Seung-bo, executive director at NCSOFT, adding that the company plans to carry out globalization step by step.

The company earlier announced that its operating income for 2018 increased 5 percent on-year to a record-high of 614.9 billion won in 2018.

The company attributed the sound performance of the mobile games business to the continued popularity of “Lineage M” in South Korea and Taiwan.

One thought on “‘Lineage M’ to Overcome Mobile Platform’s Limits”