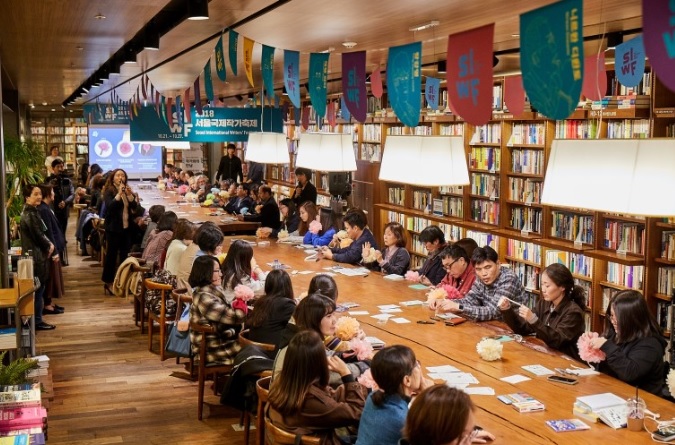 SEOUL, Sept. 18 (Korea Bizwire) — A major literary festival will bring together dozens of award-winning novelists and poets from home and abroad in Seoul next month for discussions and events with local literary fans, organizers said Wednesday.

The eighth edition of the Seoul International Writers’ Festival (SIWF) is set for Oct. 5-13 at Dongdaemun Design Plaza in central Seoul.

It was originally an biennial event but has been turned into an annual festival this year by the host, the state-run Literature Translation Institute of Korea (LTI).

This year’s edition will bring together 50 writers and Korean literary critics, including 32 award-winning fiction writers and poets from home and abroad.

The authors and critics will engage in about 25 literary events throughout the nine-day run held in the convention center, as well as at Seoul’s Sogang University and Chung-Ang University and five small book stores in the capital.

The festival will take “Thousands of Mirrors Reflecting Us” as its theme, according to the LTI.

The author line-up includes Song Sokze, Oh Jung-hee and Bae Suah from South Korea, as well as 14 writers outside Korea.

The international line-up includes China’s Liu Zhenyun, Britain’s Graeme Macrae Burnet and Canadian-born David Szalay, both Booker Prize finalists, as well as Forrest Gander of the United States, the 2019 winner of the Pulitzer Prize for poetry.

Nicolas Mathieu, the 2018 winner of French literary prize Le Prix de Goncourt, and the award’s 2008 winner, Atiq Rahimi, will also be part of the line-up.

Kim Sa-in, director of the LTI, said the institute “aims to put up a literary festival that has both the unique qualities of Korea and an international reputation.”

Information on the festival’s program is available on the official website (http://www.siwf.or.kr), and reservations will be available starting Sept. 23.