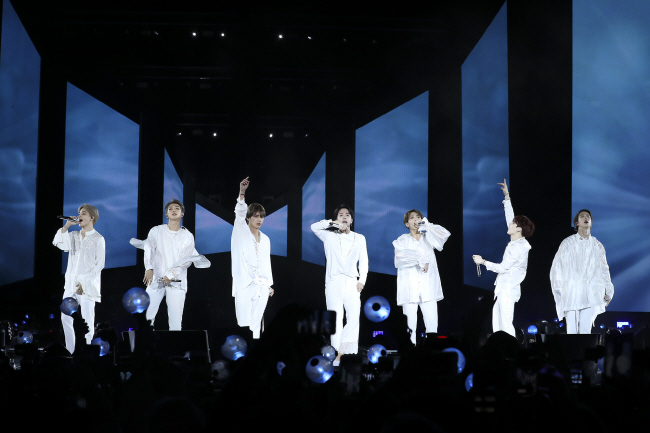 BTS capped successful concert tours of the United States and Europe by winning a cultural medal from the government of their home country. (image: Big Hit Entertainment)

SEOUL, Nov. 7 (Korea Bizwire) — October 2018 will go down in history as a memorable month for fans of the phenomenally popular K-pop boy band BTS. The seven-member group capped successful concert tours of the United States and Europe by winning a cultural medal from the government of their home country.

South Korea awarded the medal to BTS in recognition of their role in propelling the worldwide popularity of Korean pop culture, as well as the Korean language, making the septet the youngest of the seven awardees of the order of cultural merit in 2018, as well as youngest of any pop culture artists decorated with the medal.

The feverish popularity of BTS also set a record on the black market. The tickets for the national award ceremony, which were distributed free-of-charge, were put up for sale on- and off-line with price tags as high as 1.5 million won (US$1,341) even though the event did not include a performance by the group.

The episode is still only one small part of the growing competition here to get tickets for acclaimed artistic and sports events, notably concerts by the most sought-after K-pop idols. Buying tickets for high-profile performances is so competitive that the media and on-line ticket buyers call the experience “piketing,” a portmanteau of the Korean word for “bloody” with “ticketing.”

Kim Ji-young, a 36-year-old office worker, enlisted three friends in her efforts to secure a seat for concerts by her favorite boy band, Wanna One, in Seoul’s Gocheok Sky Dome in early June. One of them managed to reserve one middle-row seat out of the 60,000 tickets put up for sale, which sold out in a few minutes.

“Two or three years ago, if you were lucky, it wasn’t very difficult to secure several seats in the front row for popular performances. Now, it has become so difficult to get even one seat that I had to learn how to let go coolly,” she said.

Like Kim, many idol fans have their own skills to survive the fierce online ticketing competition. According to methods shared on the Internet, they include using faster internet connection at commercial internet cafes, practicing for the on-line ticketing process in advance or watching for random releases of canceled tickets.

Despite those skills, almost all online ticket buyers feel the ominous presence of unbeatable competitors: ticket brokers who scoop up tickets with macro programs and sell them at a huge premium.

“The front and second rows are usually taken by black market dealers who use macro programs. You should aim low and target a seat somewhere around the fifth or sixth rows if you want to be successful with ticketing,” a member of singer Lim Chang-jung’s fan club, who identified as “a teenage student,” said online ahead of the ticket opening for Lim’s nationwide concert tour in late November.

“It seems that there’s an increasing number of people who buy tickets with macro programs because it makes a lot of money,” Kim said.

Purchased tickets eventually end up on social network services, on-line communities or offline back channels for reselling, forcing K-pop fans, many of whom are young students, to resort to the black market and pay huge premiums.

According to a report by Kim Su-min, a lawmaker with the minor opposition Bareunmirae Party, a 55,000-won ticket for a fan meeting event with girl band TWICE on Oct. 28 was up for sale with a price tag of 900,000 won on the black market. The 110,000-won ticket for the November concert by boy band Seventeen went on sale for 1.5 million one while the ticket for BTS’ concerts in late August in Seoul sold for 3.2 million won in the black market.

The hefty earnings off the thriving K-pop performance industry comfortably land in the hands of ticket scalpers.

Currently, a South Korean law on minor offenses prohibits ticket reselling at a premium at public entertainment venues, stadiums, stations and other areas, punishable by a maximum fine of 200,000 won or detention. But no law is in place to regulate ticket reselling in cyber space.

In the absence of relevant laws, official ticket distributors and concert organizers took their own measures to fight the profiteering.

Salt Innovation, a performance management company that organized a concert by H.O.T., a popular boy group that disbanded in 2001, in mid-October, unilaterally cancelled a hoard of tickets suspected of having been purchased through macro programs. The company also canceled tickets when a large number of tickets were ordered to the same address. Previously, JYP Entertainment took similar measures for a concert of boy band Day6 and veteran singer Lee Seung-hwan also did the same thing.

“The Ministry of Culture, Sports and Tourism turned a blind eye to ticket scalpers feeding on the black market,” lawmaker Kim said, criticizing the ministry in charge of the entertainment industry. She is currently working to enact a new law to stop ticket scalping.