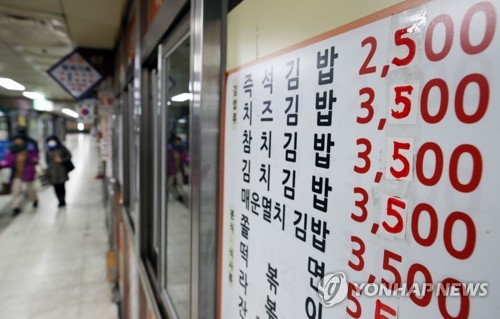 A menu board at an eatery in Seoul shows changes made to food prices in recent months. (image: Yonhap)

SEOUL, May 23 (Korea Bizwire) — Eating-out expenses and prices of processed foods in South Korea have risen significantly over the past year, data showed Wednesday, in an additional burden to local consumers.

According to the data from the Korea Consumer Agency, six out of the eight dishes most favored by South Koreans when eating out saw their prices go up over the past year.

A bowl of cold noodles, or “naengmyeon” in Korean, carried a price tag of 8,692 won (US$8.01) in the Seoul metropolitan area in April, up 9.7 percent from the same month a year earlier and marking the biggest on-year gain.

The second-largest gainer was “samgyeopsal,” or pork belly. The price of pork belly came to 16,387 won per 200 grams, up 5.4 percent from a year earlier.

Meanwhile, a bowl of “jajangmyeon,” or black bean sauce noodles enjoyed by most South Koreans, fetched 4,923 won, the same as last year. Bibimbap, a dish of mixed rice and vegetables served in a bowl, was the sole loser, with its price dropping 0.9 percent over the cited period.

The data also showed prices of popular processed foods have also risen sharply over the past year. The price of Coke surged 11.9 percent, with that of instant rice climbing 8.1 percent.

The gains come as South Korea’s consumer prices gathered ground in April on increased prices of agricultural and industrial goods.