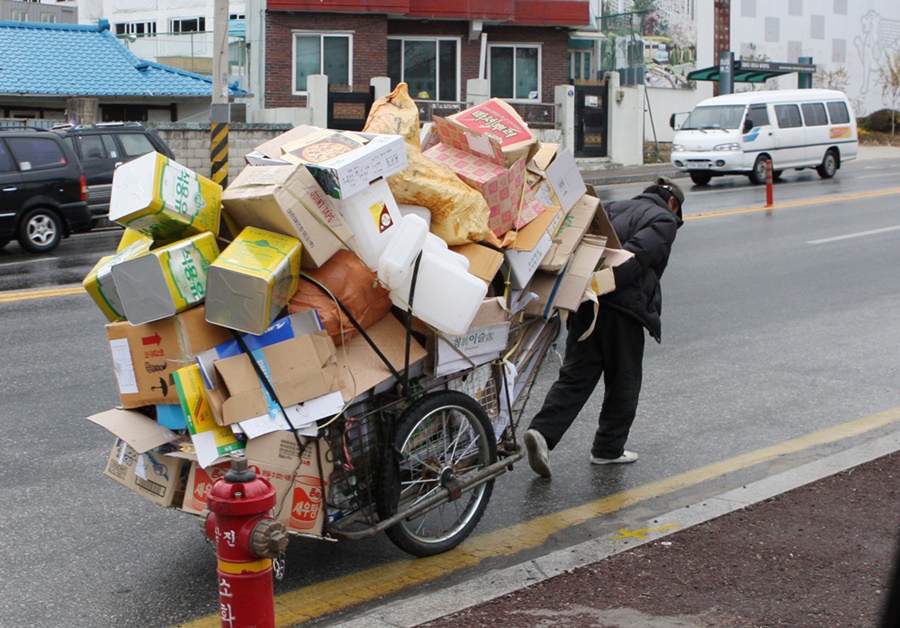 Low-income seniors collecting paper trash like cardboard, newspapers or magazines from the streets is not a rare sight in Korea. (image: Yonhap)

SUWON, South Korea, April 28 (Korea Bizwire) – An elderly from Daejeon in his 70s is being investigated by the police for collecting presidential election brochures and flyers from a local apartment complex. The suspect, whose identity was withheld, testified that he (or she) took four envelopes from mailboxes and 11 from the floor.

“I make a living selling scrap paper. I didn’t think of the fact that they will be needed for the election when I took them,” the suspect was quoted as saying by the police, who are considering charging the suspect with theft and obstruction of business.

Low-income seniors collecting paper trash like cardboard, newspapers or magazines from the streets is not a rare sight in Korea.

The latest data from the Gyeonggi provincial government revealed that there were 3,840 seniors roaming the streets of the province of 12,000,000 people, trying to make a living by selling their scrap paper.

Although the province did not investigate the average income earned by selling scrap paper, a kilogram of paper sells for roughly 50 to 60 won ($0.04 to $0.05).

Earlier this month, Gyeonggi Province came up with measures that would ease the financial burden on economically-disadvantaged seniors, who are not only exposed to strenuous labor, but also traffic accidents and cold weather during winter.

The government decided to designate 130,000 won per senior this year to provide safety vests and gloves, and reflectors for handcarts used to carry the paper.

Authorities will also provide safety education twice a year, and supply seniors with winter clothing and emergency medical support in case of accidents. The government also plans to help seniors looking for a job, and assist those seeking a different line of work.

A provincial official, in an interview with Incheon Ilbo, said that the province will continue to bolster its efforts to accommodate the elderly with further investigation into their daily income and personal backgrounds.