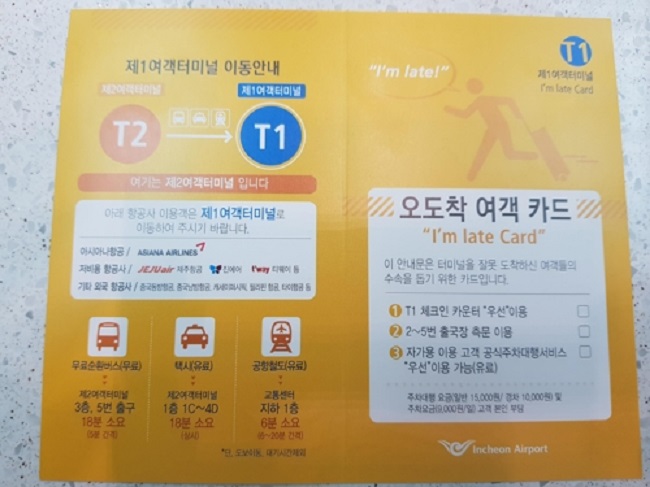 To alleviate these problems and prevent delays, information desks at the airport’s two passenger terminals are handing out “I’m Late Cards”.(Image: Yonhap)

YEONGJONG, Jan. 19 (Korea Bizwire) — Staff at Incheon International Airport’s new second terminal are aware of the inevitability of lost travelers running late, a logistical dilemma exacerbated when these tardy individuals are stuck in a brand new passenger terminal with no clue as to how to get to their flight.

To alleviate these problems and prevent delays, information desks at the airport’s two passenger terminals are handing out “I’m Late Card(s)”. The information desks, which stand adjacent to a stand propping up a giant cube with an orange question mark inscribed, are located on the departures levels of the terminals.

Possession of an I’m Late Card grants the traveler a spot at the front of the check-in line, usage of restricted passages to expedite their trip to their boarding gate, and even valet parking service for those who have arrived at the airport by car.

Only travelers whose departure time is within 90 minutes or less are able to make use of the I’m Late Card. The airport decided on the cutoff to restrict the perks the pass offers to those under time constraints.

The bus comes in five-minute intervals. Going from the second passenger terminal to the first takes 18 minutes, and the reverse journey takes 15 minutes. 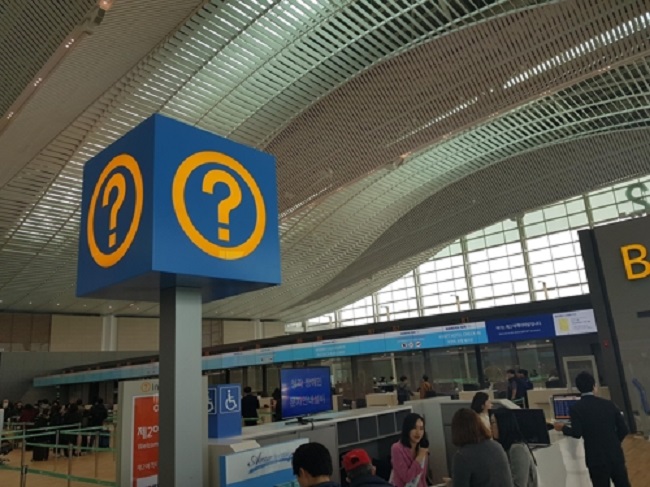 The information desks, which stand adjacent to a stand propping up a giant cube with an orange question mark inscribed, are located on the departures levels. (Image: Yonhap)

The Airport Railroad Express also connects the two terminals and boasts a shorter travel duration of 6 minutes. Those opting for the train are advised to note, however, trains only come every 12 minutes.

These measures, along with over 200 personnel situated throughout the airport complex to assist wayward travelers, are deemed necessary due to the estimated 775 occurrences of lost individuals per day.

As a preventative measure, both airlines and the airport send prospective travelers text messages with their flight details twice: once on the day before their departure, and once three hours prior to takeoff.