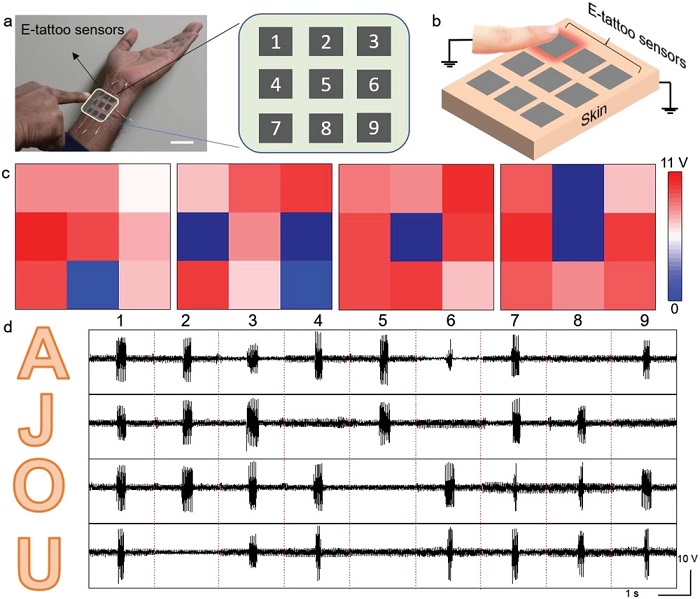 Simply by touching it, users can turn on an LED light that reacts to the circuit in the e-tattoo or run small electric devices . (image: Ajou University)

SUWON, June 15 (Korea Bizwire) — A South Korean research team has developed an ‘e-tattoo’ that can produce electricity when affixed to human skin or a soft robot and then touched.

The research team from Ajou University said Monday that it had developed an e-tattoo sticker by creating a nanofiber paper made of silk protein, a biometric-friendly material extracted from cocoons, and then drawing circuits with the wanted design on the paper with a carbon nano fiber ink.

According to the research team, the e-tattoo can be affixed to the skin like a tattoo after being soaked in water.

Simply by touching it, just like touching a switch, users can turn on an LED light that reacts to the circuit in the e-tattoo or run small electric devices such as stopwatches.

“As they are very thin, e-tattoos can be attached well even onto very wrinkled surfaces like fingerprints. Excluding showering and bathing, e-tattoos do not interfere with users’ everyday life.” said Kim Sung-hwan, a physics professor who led the study.

The results of the study were published in the June 11 online edition of the international academic journal Advanced Energy Materials.