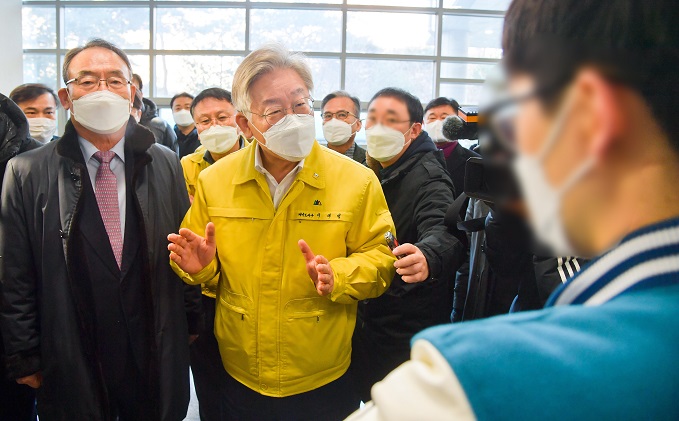 Lee Jae-myung (2nd from L), governor of Gyeonggi Province, talks to students at Kyonggi University in Suwon, south of Seoul, on Dec. 14, 2020, while touring the school’s dormitory set to be converted into a residential treatment center for COVID-19 patients. (Joint Press Corps-Yonhap)

SEOUL, Dec. 14 (Korea Bizwire) — Local governments nationwide are shifting to a wartime-like emergency posture in the face of a recent spike in coronavirus infections.

According to officials on Monday, almost all provincial and municipal governments are mobilizing all possible measures to secure more hospital beds for COVID-19 patients, expand coronavirus testing for residents and readjust their social distancing guideline levels.

In Gyeonggi Province, which has reported over 200 new daily cases in recent days, the authorities’ efforts are focused on expanding hospital beds and residential treatment facilities to accommodate the growing number of confirmed cases.

In the province that surrounds Seoul, the bed utilization rate at hospitals dedicated to COVID-19 infections rose to 91.4 percent, while the number of available hospital beds dedicated to severely ill coronavirus patients has been reduced to a mere one.

The number of ready-to-use beds at residential treatment centers for mild COVID-19 cases has also declined to 306, marking a utilization rate of 83.4 percent.

Worse yet, the number of people waiting at home after testing positive for the virus due to the hospital bed shortage rose by 23 to 308 as of midnight Sunday.

Faced with imminent saturation at the province’s dedicated coronavirus hospitals, the Gyeonggi government has begun to implement emergency mobilization measures for private facilities, including university dormitories.

In the first such move, the provincial government will convert Kyonggi University’s 1,000-room dormitory in Suwon, about 50 kilometers south of Seoul, into a residential treatment center, officials said, noting other university dorms and corporate training centers in the province will also be transformed for the same purpose. 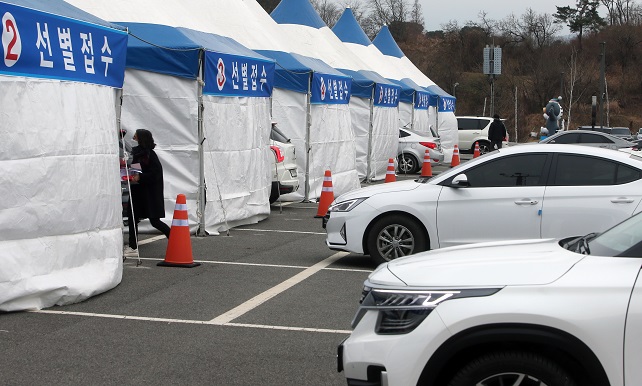 Gangwon Province, east of Seoul, is also struggling to expand residential treatment facilities after reporting over 60 new infections in the past three days.

The provincial government is also preparing for a worsening situation in which all public and dedicated hospitals are packed with COVID-19 patients and non-coronavirus patients are transferred to private facilities.

Gangneung, a Gangwon city on the east coast, has announced a plan to administer coronavirus tests to all citizens for the first time in the country, after several infection clusters recently broken out there.

Gangneung has also raised its social distancing scheme to Level 2.5, the second highest in the nation’s five-tier system.

While the central government is reportedly considering raising the social distancing level for the greater Seoul area to the highest 3 from the current 2.5, many provincial cities are pushing to lift their levels to 2.5 from the current 2.

In the central city of Dangjin, the municipality plans to raise its social distancing level to 2.5, beginning Tuesday, after a cluster of infections traced to a church showed signs of expanding.

Operational restrictions for multi-use and entertainment facilities are also expanding in many cities.

Gwangju, a metropolitan city about 330 kilometers south of Seoul, has additionally ordered all clubs, bars, karaoke rooms and indoor standing performance halls to close from 10 p.m. to 5 a.m. every day for two weeks starting Tuesday.

They are currently allowed to operate till midnight.

Restaurants and cafes are only allowed to offer takeout and delivery during the same hours. The maximum seating capacity at the city’s religious facilities has been reduced from 50 percent to 30 percent, with meals and meetings entirely banned there.