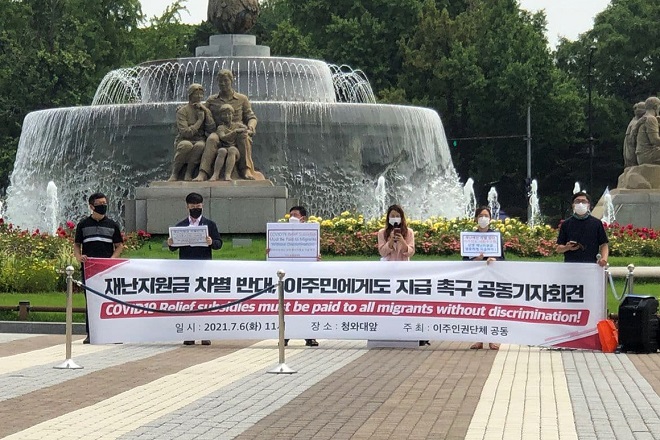 This July 6, 2021, file photo, provided by a local migrant group, shows a coalition of migrant groups calling upon the South Korean government to provide COVID-19 relief fund to migrants in the country during a news conference held in front of presidential office Cheong Wa Dae in central Seoul.

SEOUL, Aug. 31 (Korea Bizwire) — Local migrant groups on Tuesday called upon the government to come up with a non-discriminatory COVID-19 relief aid program, ahead of an envisioned massive rollout of cash handouts next month.

Around 100 migrant groups, including Migrants Center Friend, issued a joint statement demanding the government cover the migrant population in its plan to start distributing stimulus checks of 250,000 won (US$215) per person to the bottom 88 percent of South Koreans in terms of income bracket on Sept. 6.

“Many of the migrants have again been excluded from the list of people eligible for claiming the state-funded virus checks,” they said, asking the government to add the migrant population to the latest list.

Among 2 million migrants in the country, only about 300,000, who have permanent residence (F-5) and marriage migrant (F-6) visas or the same national health insurance coverage as Koreans, can receive cash handouts under the current plan, they claimed.

According to the groups, migrants have been discriminated against in South Korea’s virus-related policies, like the public supply of face masks and emergency relief funds, since the new coronavirus pandemic broke out early last year.

The country has so far provided four rounds of virus relief aid.

Migrants should be considered as part of the Korean community as they pay taxes here and have been fulfilling their responsibility in the virus fight, they added.

“Migrants have suffered the (economic) fallout of the pandemic (just like any other Koreans). There is no reason to exclude them from relief fund programs created to lessen people’s financial burden and revitalize the economy.”