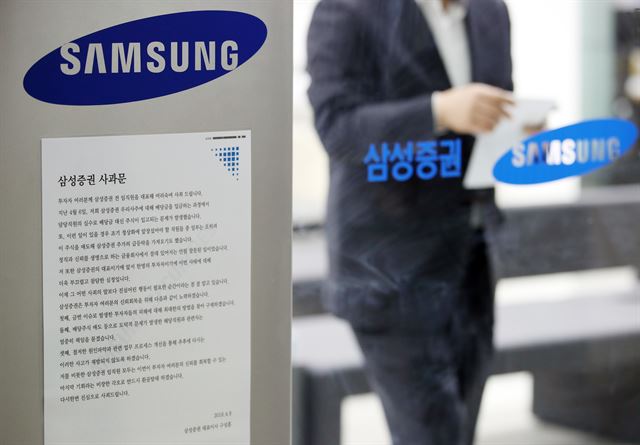 SEOUL, Jul. 9 (Korea Bizwire) — Eight Samsung Securities officials have been indicted for selling “ghost” stocks that were mistakenly issued by the company in the massive fat-finger error that recently rattled the market, prosecutors said Monday.

Three employees, including a 37-year-old surnamed Koo, will stand trial while being detained, with five others from the brokerage house indicted without physical detention, according to the Seoul Southern District Prosecutors’ Office.

They are charged with fraudulent trading, breach of trust and violating the Capital Market Act.

Prosecutors either dropped charges or decided to suspend indictments on 11 others who had also been under investigation, after taking into account the extent of their involvement in the case, they said.

The probe centered on an April 6 stock blunder in which an official at the Samsung brokerage firm mistakenly typed in 1,000 shares instead of 1,000 won per share for dividends that were to be paid to employees under a company compensation plan.

As a result it issued 2.8 billion shares that only existed on paper, worth over 110 trillion won (US$100 billion). Koo and his colleagues who received the stocks allegedly sold them off in the market.

Koo and two others that have been arrested are suspected of unloading their holdings, each worth between 20 billion won and 51.1 billion won over a dozen different transactions.

Prosecutors say they intentionally sold the shares while knowing that they were issued by mistake, as data show they continued the selling even after the firm’s trading system took steps to restrict transactions.

The sale of ghost shares incurred some 9.2 billion won in losses for Samsung Securities, prosecutors said.

The indictments follow a decision by the Financial Supervisory Service last week to fine the company 144 million won over the error.