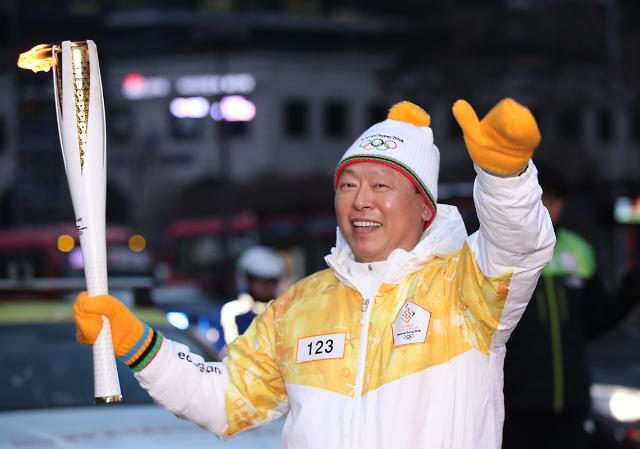 Shin Dong-bin, the head of South Korean retail giant Lotte, carries a torch for the 2018 PyeongChang Winter Olympics in Seoul on Jan. 14, 2018, as part of a nationwide 2,018-kilometer relay. (image: Yonhap)

SEOUL, Feb. 8 (Korea Bizwire) — The head of South Korean retail giant Lotte is planning to stay in PyeongChang throughout the Winter Olympic period to carry out sports diplomacy, company officials said Thursday, with the international event now just one day away.

Lotte Group Chairman Shin Dong-bin will head to the alpine town of PyeongChang, 180 kilometers east of Seoul, to attend the opening ceremony Friday, they said.

As the chief of the Korea Ski Association, Shin plans to meet with various sports figures and encourage South Korean athletes participating in the 17-day Olympics, the officials said.

Shin is awaiting a court decision next week over bribery allegations involving former President Park Geun-hye, who was dismissed from office last year following a massive corruption scandal. Prosecutors have demanded a four-year term for the business tycoon.