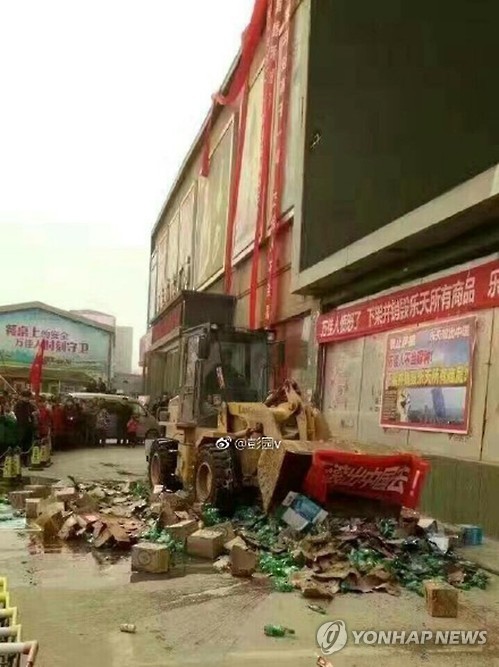 This photo, taken on March 5, 2017, from the Chinese microblog Weibo, shows products of South Korea’s Lotte Chilsung Beverage Co. being destroyed by a bulldozer at a wholesale market in China’s Henan Province, as China has been expressing strong hostility toward South Korea’s decision to allow the deployment of an advanced U.S. missile defense system in the country. (Yonhap)

SEOUL, April 15 (Korea Bizwire) – Lotte Group is expected to suffer damage in sales worth 1 trillion won (US$875.7 million) over the first half of 2017, industry watchers said Saturday, as China continues to condemn its decision to help the South Korean government’s deployment of a U.S. missile defense system.

China has been putting pressure on Lotte, South Korea’s fifth-largest family-controlled firm, since it handed over one of its properties to the Korean military so it can be used as a site for a U.S. Terminal High Altitude Area Defense (THAAD) battery.

Beijing has been strongly protesting the deployment, claiming the system will have an adverse effect on its military strategy. The South Korean government, on the other hand, claims the deployment is vital to improve its defense capabilities against Pyongyang’s provocations.

Nearly 90 percent of around 100 Lotte Mart outlets in China have been placed under suspension due to their failure to meet fire or other regulations or on voluntary suspension since February, as some Chinese consumers continued to stage anti-Korea protests near the stores.

“Lotte is facing the biggest crisis as China’s retaliation against the THAAD battery fails to win attention in the Washington-Beijing summit, or South Korea’s diplomacy towards China and the United States amid the deepening tension in the Korean Peninsula,” an official from Lotte said.