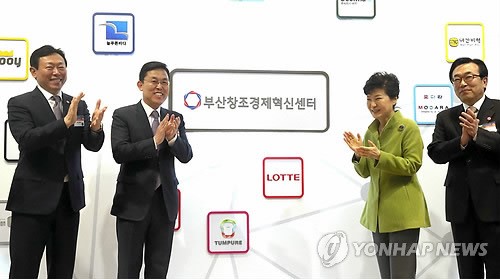 The innovation center in Busan “should play a leading role in making Busan a major city in the film industry and international film market,” Park said in a ceremony marking the launch of the center. (image: Yonhap)

Lotte will account for half of the proposed fund while Busan Bank and the Busan City government will contribute 16 billion won and 4 billion won, respectively, the office said. This comes as President Park Geun-hye recently opened the latest innovation center in Korea’s second largest city about 450 kilometers southeast of Seoul.

The innovation center in Busan “should play a leading role in making Busan a major city in the film industry and international film market,” Park said in a ceremony marking the launch of the center.

The innovation center is the seventh of its kind in South Korea.

South Korea has been pushing to set up such centers across the country to match local startups and venture firms to conglomerates, known here as chaebol, which can provide resources to smaller companies so that they can turn creative ideas into real businesses.

Lotte Group is a major conglomerate, whose businesses range from department stores and discount chains to hotels and fast-food restaurants, as well as having a construction unit and movie chain.

Park also said the fund will be used in a wide-range of film industry activities, including investment, distribution and screening of movies, to help make the dreams of creative filmmakers come true.

Busan is the host city of the annual Busan International Film Festival, which has become Asia’s largest film festival since its foundation in 1996.