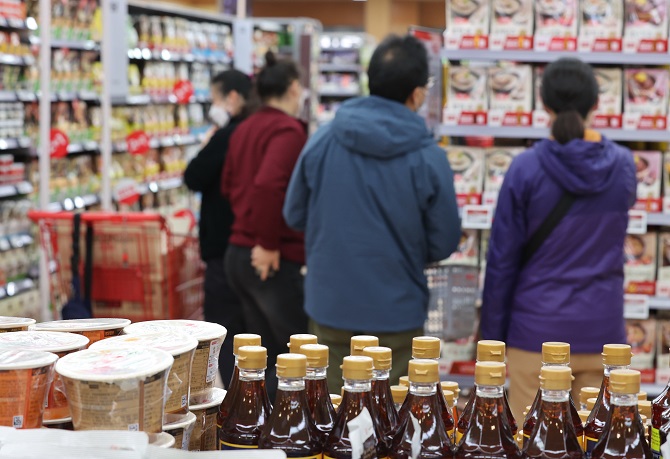 In this file photo from Nov. 21, 2022, people shop for groceries at a large discount store in Seoul. (Yonhap)

SEOUL, Nov. 22 (Korea Bizwire) — The lower income tier spent more than half of its disposable income on food in the third quarter of this year, with consumers directly exposed to surging prices, the statistics agency said Monday.

Statistics Korea’s Household Income and Expenditure Survey showed that households located in the lower 20 percent of the income tier spent a monthly average of 429,000 won (US$316) in this year’s third quarter, which was 47.5 percent of all disposable income.

Households in the top 20 percent of the income tier spent 15.9 percent of their disposable income on food. The next quintiles spent 20.8 percent, 23.5 percent, and 26.5 percent on food.

Soaring prices of food in recent years have posed a large risk to the public.

The price of food and non-alcoholic drinks in this year’s third quarter jumped by 7.9 percent from the previous year, exceeding the overall rise of consumer prices (5.9 percent).

The cost of dining out and other food services jumped by 8.7 percent, reaching a new 30 -year high.

Spending on food by the bottom 20 percent of the income tier jumped by 3.7 percent from last year. On a net standard, excluding fluctuations in consumer prices, food costs dropped by 4.1 percent.

Increasing consumer prices have led to rising expenditures, but the actual food consumption by households has shrunk.