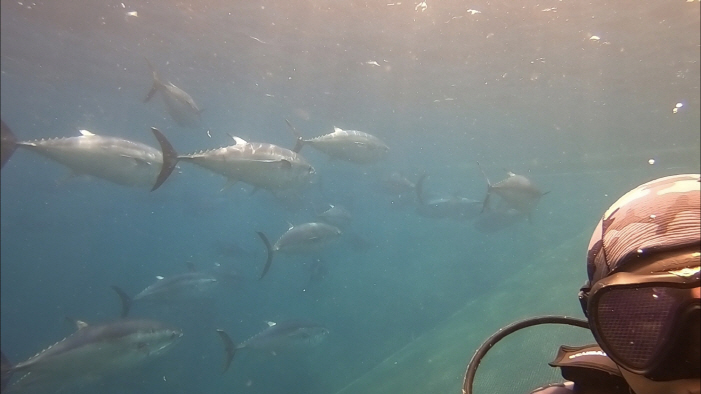 The sea temperatures off the east coast of the Korean peninsula have risen by 0.1 to 5.5°C compared to average years, attracting more tuna. (image: Yonhap)

CHUNCHEON, Mar. 4 (Korea Bizwire) — An increasing quantity of tuna is being caught on the east coast of Gangwon Province.

However, those plying their trade in the waters off the east coast have yet to benefit financially from the tuna.

Recently, a rise in sea temperatures and the formation of new food chains led an increase in the tuna population in the coastal seas of South Korea, with 898 kilograms of tuna caught thus far this year for total revenue of 10 million won (US$8,892).

The sea temperatures off the east coast of the Korean peninsula have risen by 0.1 to 5.5°C compared to average years, attracting more tuna.

Currently, between 200 and 500 kilograms of tuna are being caught every day off the coast of Gangneung and Samcheok in Gangwon Province.

However, the tuna quota allocated to Gangwon Province is too low to ensure income for the fishing industry in the region.

This year, the Western and Central Pacific Fisheries Commission (WCPFC) set the catch quota for tuna at 671 tons for South Korea, from which the South Korean Ministry of Oceans and Fisheries has allocated 1,680 kilograms to Gangwon Province.

Gangneung, Donghae, and Samcheok, the three major cities in Gangwon Province, have already exceeded their quotas.

Tuna is a profitable species that sells for around 15,000 won (US$13) per kilogram. Once the quotas are filled, however, any tuna that is caught must be set free.

Based on the expectation that the tuna population in the region will increase, Gangwon Province plans to make a proposal to the Ministry of Oceans and Fisheries to be allocated a larger quota.

“We’ve been seeing an increasing number of tuna being caught every year since 2012,” said the Donghae branch office of the Gangwon Provincial Office.

“We will expand the catch quotas for tuna as well as implement necessary measures to increase profits in the fishing industry.”