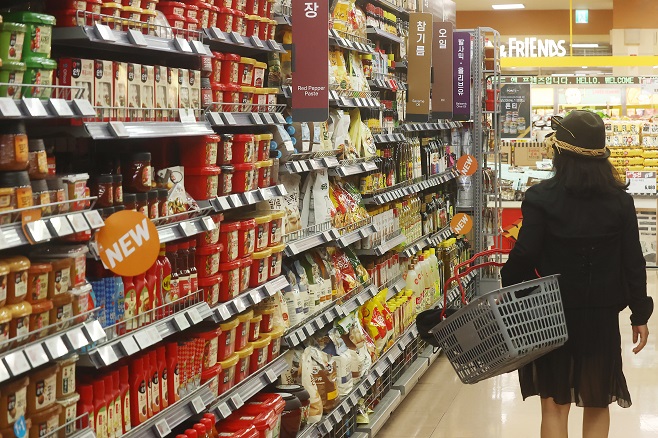 A citizen looks at a shelf of processed foods on May 30, 2022, at a discount store in Seoul amid high-flying inflation. (Yonhap)

SEOUL, June 8 (Korea Bizwire) — Households in the lower income tier are spending a significant share of their income on food, including groceries and dining out, data showed Tuesday.

The Ministry of Economy and Finance and Statistics Korea said that 42.2 percent of the average disposable income (847,039 won) earned by households in the lower 20 percent income tier was spent on groceries and dining out.

This indicates that the lower-income tier households spent almost half of their disposable income on food.

It exceeds spending on food among households in the top 20 percent of the income tier (13.2 percent) by more than threefold, as well as the country’s overall average (18.3 percent).

“With higher living expenses, prices of food and dining have been surging, curtailing the purchasing power of the people and those in the low income tier,” the ministry said.

“Higher prices are forcing people to cut back on their expenditures,” said Joo Won, a senior economist at Hyundai Research Institute. “Inflation is hurting the domestic economy.”