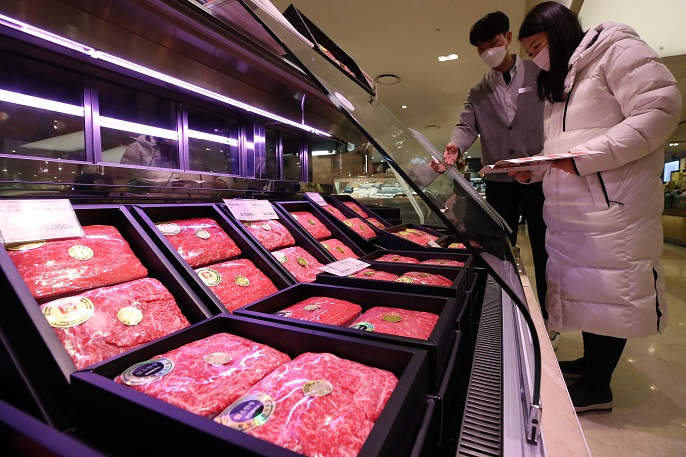 Gift sets of Korean beef, or “hanwoo,” for Lunar New Year are displayed at a department store in central Seoul on Jan. 18, 2021. (Yonhap)

SEOUL, Feb. 10 (Korea Bizwire) — In the midst of an increase in the number of South Korean consumers who are opting to send gifts rather than visit their hometowns during the Lunar New Year holiday due to the COVID-19 pandemic, young and middle-aged consumers showed significantly different buying habits when it comes to Lunar New Year gifts.

The nation’s two major online shopping portals, Gmarket and Auction, both run by eBay Korea, saw sales of Lunar New Year gifts for the period from January 26 to February 1 rise by 17 percent year on year.

Among the items purchased by middle-aged consumers, sales of e-coupons marked the highest growth rate at 67 percent, followed by fresh food at 45 percent, processed food at 21 percent, daily necessities at 19 percent, and health food at 12 percent.

During the same period, the average per-capita purchase amount registered growth of 18 percent compared to a year ago.

“Consumers in their 20s and 30s, most of whom are unmarried, focused on buying gifts mainly for their parents and immediate family members, while those in their 40s and 50s tend to buy gifts even for neighboring relatives.” said Kim Tae-soo, head of sales at eBay Korea.