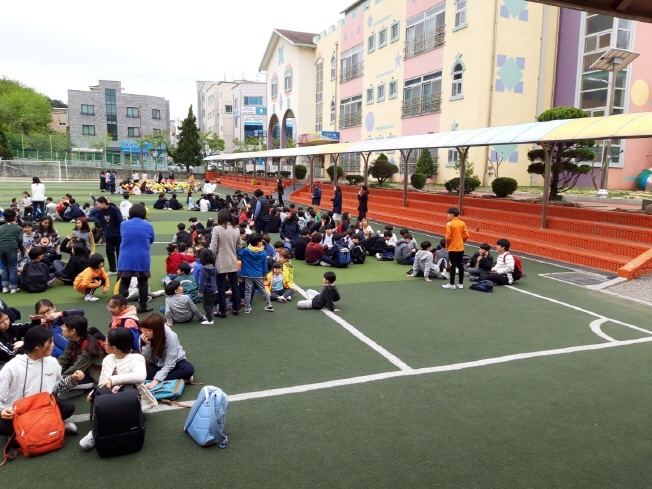 Students evacuating their classrooms to assemble in the playground of an elementary school in the city of Gangneung on South Korea’s east coast on April 19, 2019, after a magnitude 4.3 earthquake struck off the east coast near the city of Donghae. (Yonhap)

SEOUL, Apr. 19 (Korea Bizwire) — A 4.3 magnitude earthquake struck off the east coast near the city of Donghae on Friday, the Korea Meteorological Administration said.

The temblor occurred at 11:16 a.m. centered about 54 kilometers northeast of the city. Residents of the region are believed to have felt the quake, though it resulted in no damage, the weather agency said.

Earlier in the day, the agency announced a quake with a magnitude of 4.2 hit the region in waters 56 km northeast of the city, but revised the quake’s intensity and location within five minutes.

The agency made the change after conducting a further manual analysis of information based on the quake’s seismic waves, it said.

The quake shook buildings in the nearby coastal towns of Gangneung, Samcheok, Yangyang, Sokcho and Goseong.

The municipal offices of the towns only issued a quake warning to their residents 20 to 50 minutes after the quake, drawing the ire of residents.

It was the second time this year that a quake with a magnitude of 4.0 or higher has struck South Korea. On Feb. 10, a 4.1 magnitude quake occurred 50 km off the coast of Pohang, North Gyeongsang Province, southeastern South Korea,

South Korea’s Nuclear Safety and Security Commission said that no low- to intermediate-level radioactive waste or commercial atomic reactors were affected by the quake.

The epicenter of the quake is estimated to have been 88.4 km away from the Hanul nuclear power plant in Uljin on the east coast.

The country currently operates 24 commercial reactors at four nuclear power plants across the country and one waste site in Gyeongju, 370 km southeast of Seoul.

“All systems were checked at the nuclear facilities and no irregularities have been detected,” the safety commission said.