Business leaders join a group photo session at the KINTEX convention center in Goyang, near Seoul, on Sept. 8, 2021, as they take part in the H2 Business Summit ahead of a hydrogen mobility show to showcase the latest technologies in fuel cell electric vehicles and trams and discuss major trends in the hydrogen economy. (Pool photo) (Yonhap)

SEOUL, Sept. 8 (Korea Bizwire) — The heads of South Korea’s major conglomerates on Wednesday launched a business council to foster hydrogen as a clean energy source and expand its value chain.

The business leaders created the Korean version of the Hydrogen Council — a global coalition of CEOs committed to expediting the energy transition with hydrogen — as part of industry-wide efforts to cut carbon emissions and capture a growing share of the emerging energy market.

The hydrogen council was founded on the sidelines of the H2 Mobility+Energy Show, which runs through Saturday at KINTEX convention center in Ilsan, just north of Seoul, for a four-day run, with more than 150 companies and research institutions from 12 countries.

The private sector’s move is expected to boost the government’s plan to shift from fossil fuels to clean and renewable energy as part of its net zero carbon goal by 2050.

Hydrogen is an environmentally friendly alternative to fossil fuels as automobiles running on the resource only create water in the process of generating power. It can be produced as a by-product of industrial facilities, including petrochemical plants as well. 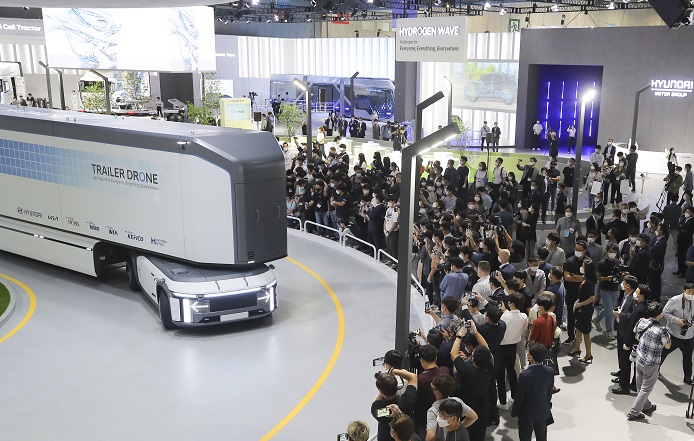 Visitors watch a test drive of Hyundai Motor Co.’s fuel cell trailer drone during the H2 Mobility+Energy Show, a hydrogen industry fair held at KINTEX in Ilsan, north of Seoul, on Sept. 8, 2021. It runs through Sept. 11 and brings together 150 companies and research institutions from 12 countries. (Pool Photo) (Yonhap)

Hyundai Motor Group has said it will inject 11.1 trillion won to develop hydrogen fuel cell systems and expand its usage in different areas, including robots and environment friendly generators by 2040.

During the hydrogen mobility show, Hyundai Motor unveiled the concept for its fuel cell Trailer Drone, which can operate fully autonomously, as it plans to develop hydrogen fuel versions of all its commercial vehicles by 2028.

Powered by the modular fuel cell “e-Bogie”, it can travel up to 1,000 km on a hydrogen tank comparable to existing container transportation systems, the automaker said.

Hyundai also unveiled its third-generation fuel cell stack technology, which is expected to be equipped on hydrogen vehicles beginning in 2023.

SK Group, which has refinery-and-battery unit SK Innovation Co. under its wing, plans to invest 18.5 trillion won to establish facilities that can create up to 30,000 tons of hydrogen annually and expand the charging infrastructure.

“The council members could create new opportunities in the hydrogen sector, while financial institutions could push for creating funds for overseas projects and investment in hydrogen infrastructure to expand the industry,” SK Group Chairman Chey Tae-won said.

POSCO, the world’s fifth-largest steelmaker by output, has said it will spend 10 trillion won to venture into methods to harness hydrogen instead of coal during its production of steel as part of its shift from carbon-intensive business to a more sustainable model.

POSCO said it is working on the commercialization of hydrogen-based steelmaking technologies to reduce carbon emissions from its manufacturing process.