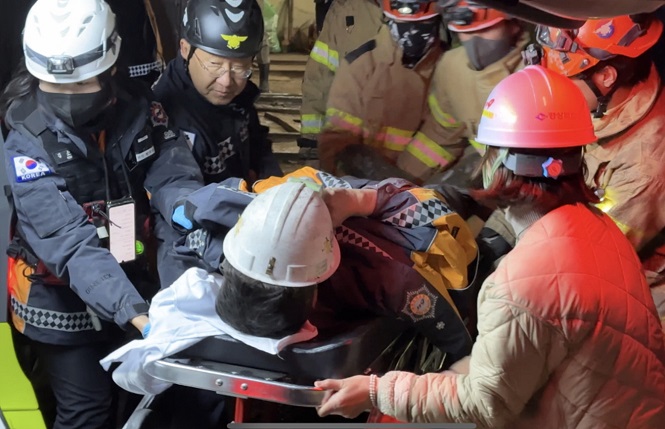 This photo provided by fire authorities shows a miner being carried into a hospital on Nov. 4, 2022 after being rescued from a collapsed mine nine days after being trapped.

SEOUL, Nov. 10 (Korea Bizwire) — Many survivors of past mining accidents were unable to return to their former jobs as miners.

Yang Chang-seon, a former miner who rescued from a collapsed mine in Cheongyang County, South Chungcheong Province in 1967, chose to leave the mines after the accident.

He was rescued after 368 hours, becoming the country’s longest survivor of a mining accident.

Lee Ok-cheol, also a former miner who survived the Eunseong Coal Mine collapse in January 1981 after being trapped for 115 hours, wanted to return to the mines.

His employer, however, put him in an office position.

Many other miners who survived mining accidents in the coal town of Taebaek, 271 km east of Seoul, in the 1970s and 1980s chose not to return to work.

“It’s probably the trauma that makes it hard for them to go back to mining,” an industry official said. “Even if they want to return, their employers would have encouraged them not to.”