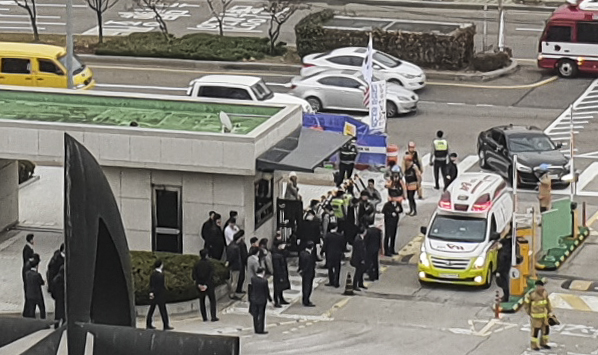 Policemen and firefighters handle the scene at the entrance of the Supreme Court in Seoul on Nov. 27, 2018, after a vehicle carrying the court’s chief Kim Myeong-su was attacked with a firebomb. (image: Yonhap)

The attack happened at 9:10 a.m. when the 74-year-old suspect, only identified by his surname Nam, threw the firebomb at the car as it was entering the top court building in southern Seoul, police said.

One of the front tires caught fire, but it was immediately put out by security guards with a fire extinguisher.

Kim suffered no injuries. Police arrested Nam on-site and took him to their precinct.

Nam was staging a one-person protest in front of the top court before he lit the plastic bottle filled with gasoline and lobbed it toward the car, according to the police.

Police said they are investigating him to figure out his motive.