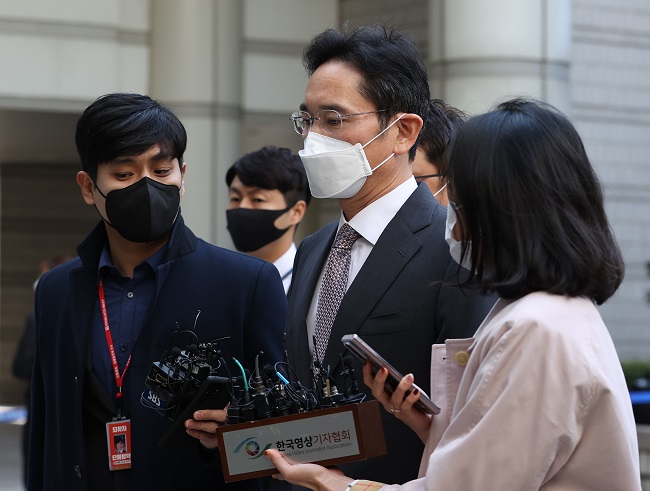 Samsung Group heir Lee Jae-yong (C) heads to the Seoul Central District Court on Oct. 26, 2021, on a ruling over a medication case. (Yonhap)

The Seoul Central District Court also ordered an additional forfeiture of 17 million won as it convicted Lee of violations of the Narcotics Control Act.

The fine and the forfeiture are the same as what prosecutors had demanded for Lee.

In June, prosecutors indicted the Samsung Electronics Co. vice chairman on charges of taking propofol for purposes other than medical treatments at a plastic surgery clinic in southern Seoul on a total of 41 occasions between January 2015 and May last year.

The court said that habitual use of propofol, which has the same high levels of addiction and dependency as other illegal drugs, should be strictly prohibited.

“The level of dosage taken was quite high and the seriousness of his crime is not light although he, considering his social influence, is supposed to be compliant with the law and serve as an exemplary person,” the court said.

The court also urged Lee “to break free of propofol and become a healthy and exemplary parent to children.”

Prosecutors had initially sought a 50 million-won fine for Lee via a summary indictment but brought the case to a regular court trial and filed for a higher fine after Lee was found to have used propofol more frequently than initially believed.

Lee previously served time behind bars, as he was sentenced to 2 1/2 years in prison by the Seoul High Court on Jan. 18 in a retrial of a bribery case involving former President Park Geun-hye. He was released on parole in August.