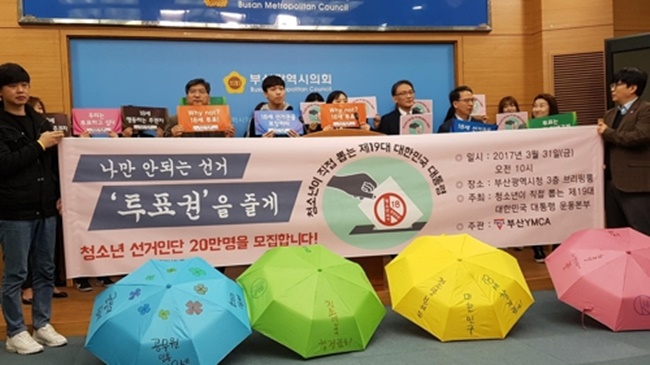 The organizers of the mock election, including members of the Busan YMCA, launched the event at a press conference held at the Busan Metropolitan Council briefing room last Friday. (Image: Yonhap)

SEOUL, April 4 (Korea Bizwire) – In the wake of growing calls to lower the voting age, around 200,000 18-year-old South Korean youth will cast their votes in a mock election set to be held on the same day as the upcoming presidential election day in May.

The organizers of the mock election, including members of the Busan YMCA, launched the event at a press conference held at the Busan Metropolitan Council briefing room last Friday.

“Efforts to pass voting reforms to include 18-year-olds were thwarted last February when political parties failed to reach an agreement.

“To help achieve political rights for young Koreans, we decided to give all 18-year-olds around the nation a chance to participate in a mock election which will be held on the same day as the presidential election,” the organizers said.

The mock election, which is intended to draw attention to the importance of granting 18-year-olds the right to vote, will take place both online and in person.

Under current South Korean laws, only those over 19 years of age are eligible to vote, and calls and public support for a lower voting age are steadily growing.

Heo Yeong-ran, co-representative of the YMCA in South Korea, said, “South Korean youth are citizens and members of society like anybody else, and to call for the inclusion of 18-year-old voters, we decided to hold this mock election.”