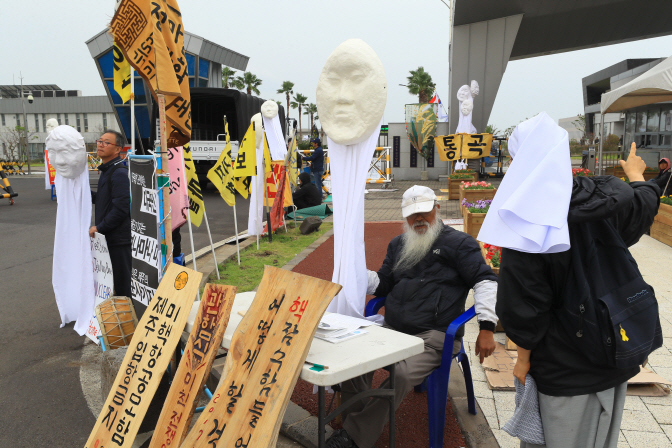 The Joint Action to Protect Jeju Island for Peace Against 2018 International Fleet Review, comprised of Gangjeong Residents Against Navy Base and other civil groups, staged a rally in front of Jeju’s naval base. (image: Yonhap)

SEOUL, Oct. 11 (Korea Bizwire) — Gangjeong village residents on Jeju Island have launched a protest against the international fleet review that began on Wednesday.

The Joint Action to Protect Jeju Island for Peace Against 2018 International Fleet Review, comprised of Gangjeong Residents Against Navy Base and other civil groups, staged a rally in front of Jeju’s naval base.

Carrying the ‘Sewol Ferry’s Face of Truth,’ a mask designed by Lee Hyo-lip, a director of traditional Korean plays, protesters delivered strong messages to people entering the base.

As a cultural side event, protesters made Gimaes, or tools used for traditional rituals in Jeju, to conduct the ‘Dohwansang’ ceremony wishing for peace to return to Jeju island, where peace is currently ‘asleep’ because of the naval base.

After sunset, the protesters held cultural festivals in the name of protecting the peaceful island of Jeju.

Some protesters rode their kayaks out to the sea to stage a rally against the fleet review, while others went picketing in front of the main gate of the naval base.

The Joint Action Against Fleet Review will hold a press conference with the Korean Confederation of Trade Unions on Thursday in front of the main gate, when the actual naval review takes place.

At the press conference, Kang Dong-kyun, president of Gangjeong Residents Against Navy Base, and Hwang In-cheol, activist from National Solutions for Jeju Naval Base, will be giving speeches against the fleet review.

The activists will then stage a performance surrounding the base hand-to-hand, to protest against the naval review. As many as 200 people are expected to participate in the protests.

Organizers of the protests said that the international fleet review was no more than a show of military strength that goes against the principle of peace on the Korean peninsula, and that the Navy was trying to use this occasion as an excuse to make its presence on Jeju a fait accompli.