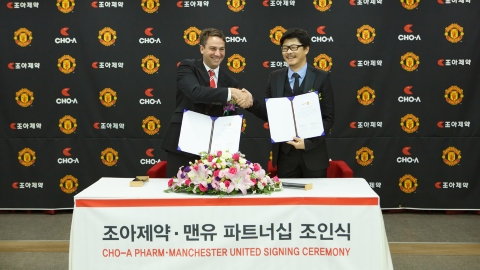 The partnership will see Club imagery placed on Cho-A Pharm’s diverse range of products including nutritional and dietary supplements as well as over-the-counter (OTC) medicines.

Cho-A Pharm., which celebrates its 26th anniversary this year, produces over 200 products, exporting to more than 20 countries. Domestically, Cho-A’s products are distributed by MediPharm, the company’s wholly owned subsidiary and the biggest pharmacy chain in South Korea with a network of over 1,000 outlets.

Richard Arnold, Group Managing Director at Manchester United, said:
”With an on-going commitment to product innovation, coupled with a desire to be an industry thought leader, Cho-A is a market leader in Korea and Vietnam.

“Cho-A has impressive plans to globalise its business and a commitment to empowering aspiring footballers in the two markets through the partnership with Manchester United. With over 40 million Manchester United followers in South Korea and Vietnam, Cho-A gives us another fantastic opportunity to engage our fans in the region.”

“Cho-A is proud to be partnering with Manchester United, one of the most prestigious football clubs in the world. We look forward to generating consumers’ interest in our brand and products by leveraging Manchester United’s strong global brand equity.”

Manchester United is one of the most popular and successful sports teams in the world, playing one of the most popular spectator sports on Earth. Through our 136-year heritage we have won 62 trophies, enabling us to develop the world’s leading sports brand and a global community of 659 million followers. Our large, passionate community provides Manchester United with a worldwide platform to generate significant revenue from multiple sources, including sponsorship, merchandising, product licensing, new media & mobile, broadcasting and match day.