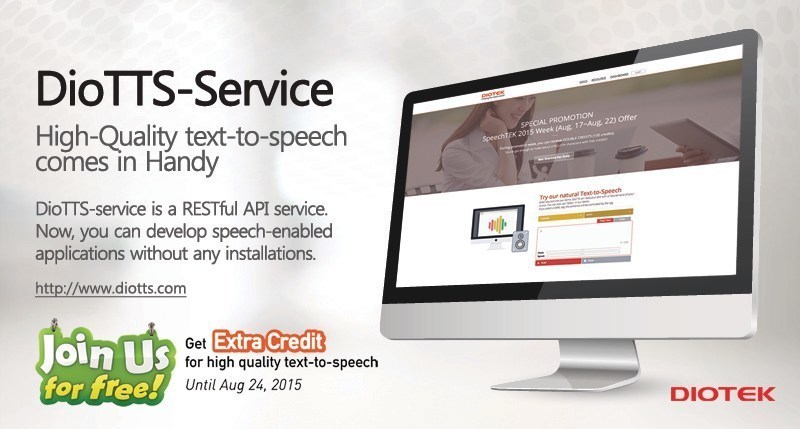 DIOTEK’s TTS engine is expected to be launched as DioTTS-Service, a cloud-based text-to-speech solution for developers to create and host their applications. (image: DIOTEK)

SEOUL, Aug. 17 (Korea Bizwire) — DIOTEK (www.diotek.com), a company specializing in speech solutions such as speech synthesis and speech recognition, announced that it will participate in SpeechTEK 2015 held in New York, an exhibition that specializes in speech technology.

In addition, DIOTEK’s TTS engine is expected to be launched as DioTTS-Service, a cloud-based text-to-speech solution (TTS as a Service) for developers to create and host their applications. The DioTTS-Service offers TTS through RESTful APIs which enables to respond flexibly to potential global customers by offering an online service that uses a billing method based on real-time speech synthesis usage.

DIOTEK has secured multi-language speech products through R&D over 17 years. Its commercial results in wide-ranging applications including IVR, smart home appliances, telecommunication, ebook, broadcasting, navigation, and education market are mainly focused on the Asian market such as Korea and Japan.

To expand its global market presence in North America, DIOTEK will introduce its solutions during SpeechTEK 2015 and expects a strong U.S. interest.

To celebrate DIOTEK’s participation in SpeechTEK, DIOTEK will hold a promotion event where free extra credits will be handed out to users who sign up to the DioTTS-Service (www.diotts.com). The event will be held from the first day of SpeechTEK on August 17 to August 24.