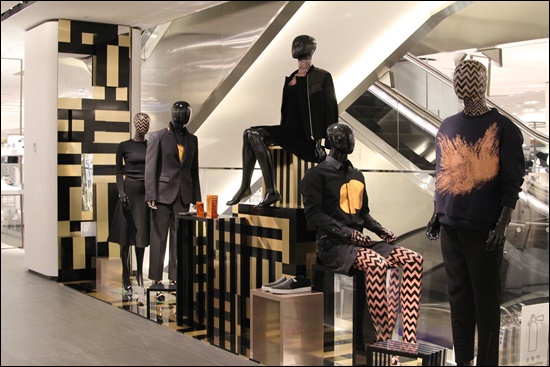 The department store selected 15 kinds of mannequins out of 300 various posed ones it has researched. (image: Galleria Department Store)

SEOUL, Sept. 6 (Korea Bizwire) – Mannequins no longer stand still in a department store. They work in the office, check their smartphone and put on make-up in front of a mirror.

The Galleria Department Store announced on September 4 that it would replace existing mannequins with new ones in accordance with its Fall/Winter renewal. The department store selected 15 kinds of mannequins out of 300 various posed ones it has researched.

Every story has its own theme such as ‘home & office,’ ‘Street & School,’ and ‘Family & Work,’ and mannequins strike poses according to the theme. A mannequin takes a subway train while another walks the dog. The mannequins reflecting city people wear outfits completely suitable to the occasion, drawing customers’ attention and making them feel empathy.

While various-posed mannequins attracting consumers freshen up the store in Korea, British mannequins give information about what they are wearing to shoppers on the spot. A technology called VMBeacon in a mannequin let customers with the appropriate app check out details such as prices or links to the retailer’s website on the phone.

In case of mannequins equipped with cameras, also known as EyeSee mannequins made by Almax SpA, they identify information such as age, race and gender of shoppers and record how long they spend time around the mannequins to analyze the pattern and improve sales.

In Venezuela, mannequins with very huge breasts, apple-shaped hips, a wasp waist and longer legs are excessively popular since the body of the mannequin is exactly what Venezuelan women want to have. As cosmetic procedures are fashionable among Venezuelan women, the mannequins are favored even though it looks exaggerated a bit.