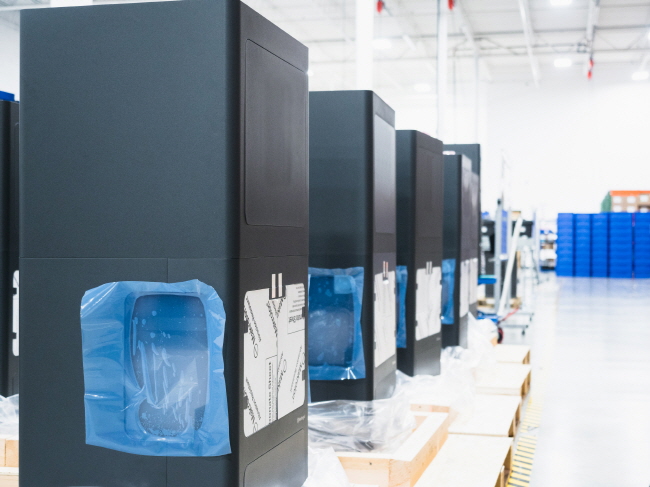 WATERTOWN, Mass., Dec. 3 (Korea Bizwire) — Markforged, the 3D printer company transforming manufacturing, today announced its “Metal Monday” sales event, where every order for a Metal X system received before December 17 will be fulfilled before the end of the year*. This announcement follows the recent news that the Boston-area startup had already shipped over 100 metal 3D printing systems – which includes printer, sinter, and washing station – since March of this year. To learn more about the Markforged Metal X, and to take advantage of Metal Monday, please visit http://markforged.com/metal-x

The Metal X has already become an industry favorite thanks to its low cost, safe installation, and desktop form factor, and hundreds of Markforged customers are seeing massive returns on investment with accelerated time-to-market and, in some cases, upwards of 95% cost savings on part production. Since Markforged first began shipping the Metal X this year, the company has worked diligently to fully ramp manufacturing, and can even produce orders for delivery this year.

“You look at all the companies in the desktop-sized metal 3D printing and all the surrounding hype, but we’re still the only ones shipping,” said Markforged CEO and co-founder Greg Mark. “Metal Monday is a commitment to our customers and to the industry. When we say we’re going to ship by a certain date, we’re not going to come back a month later with a different, much longer timeline. We’re moving Metal X out the door faster than ever – there’s no reason to wait around anymore for a metal 3D printer that will change the way you make things.”

About Markforged
Markforged transforms manufacturing with the most affordable 3D printers capable of producing parts tough enough for the factory floor. Engineers, designers, and manufacturing professionals all over the world rely on Markforged metal and composite printers for tooling, fixtures, functional prototyping, and high-value end-use production. Founded in 2013 and based in Watertown, MA, Markforged has over 200 employees globally, with $57 million in both strategic and venture capital. Markforged was recently selected by Forbes as one of the Next Billion Dollar startups, and named by Deloitte as one of the top ten fastest growing tech companies in the country. To learn more about Markforged, please visit https://markforged.com