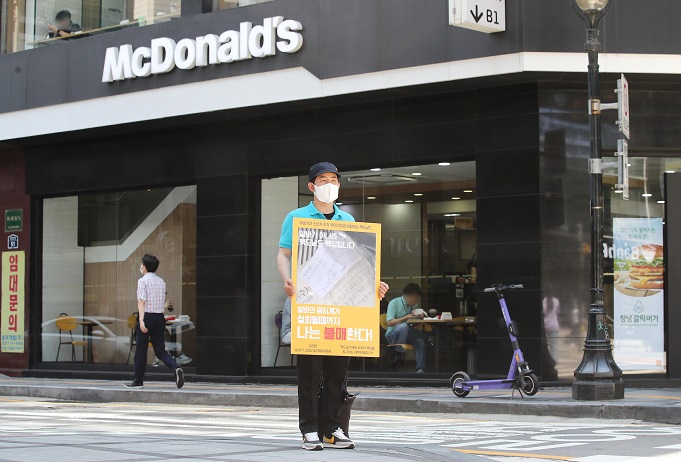 This Aug. 9, 2021, file photo shows Park Chang-jin, the deputy chief of the progressive Justice Party, holding a picket sign in front of a McDonald’s store in central Seoul, criticizing McDonald’s Korea’s response to allegations that one of its branches used expired buns. (Yonhap)

SEOUL, Aug. 17 (Korea Bizwire) — Police said Tuesday they have launched an investigation into an allegation that a Seoul branch of McDonald’s Korea used food products past their expiration dates.

The Gangnam Police Station in southern Seoul has been investigating the CEO of McDonald’s Korea on charges of violating the Food Sanitation Act after the Anti-Corruption & Civil Rights Commission, which received a tip-off from a company insider, transferred the case to the police last Friday.

A Seoul branch of the global fast-food chain’s Korean unit has been accused of using expired buns by attaching new date labels on the products.

Earlier this month, McDonald’s Korea issued a statement admitting that its internal investigation found the allegation to be true and apologized for the incident.

“The expiration dates (of the buns) were shorter than normal periods since McDonald’s set them voluntarily shorter to make sure the ingredients were of better quality,” the company said.

The police said they will review whether expiration regulations under the Food Sanitation Act can be applied to the fast-food chain’s internal guidelines.