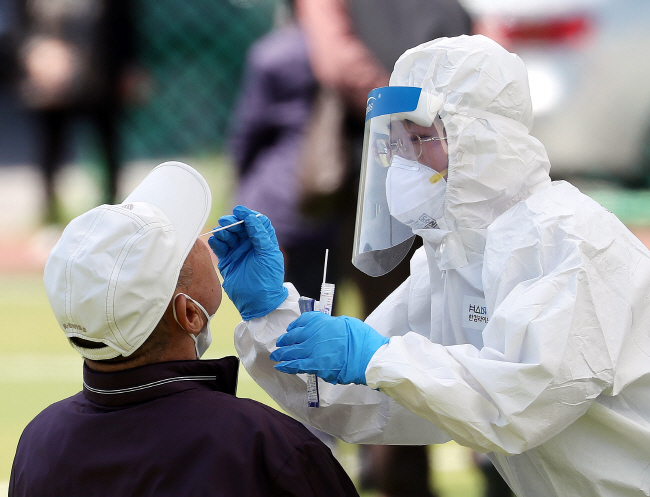 A health worker checks a man who went to a church that an Itaewon-related patient visited, in an outdoor screening center at Michuhol Ward Office in Incheon, west of Seoul, on May 14, 2020. (Yonhap)

SEOUL, May 15 (Korea Bizwire) — When South Korea’s virus curve was on the verge of a steep rise in late February, Kim Sung-dug, a veteran nurse with two decades of experience, arranged a family meeting to reveal her decision — to volunteer to help coronavirus patients in the virus-hit Daegu.

It was not a easy decision for her with three kids and a husband, but the nurse at the Daejeon Veterans Hospital persuaded her family and friends that it was a matter of principle at a time when many virus-infected people need intensive medical care.

Starting March 8, the nurse looked after patients for two full weeks at Dongsan Hospital in Daegu, one of the country’s virus outbreak epicenters.

The 42-year-old medical worker was then placed in self-quarantine as a precautionary measures. She tested positive for the illness on April 4 and has been in isolation for over 40 days at a hospital in North Jeolla Province.

“I have no regrets about my decision to serve,” the nurse, who is in good health but has tested positive on repeated virus screening tests, said in a statement provided by the Korea Nurses Association (KNA) to Yonhap News Agency.

In recognition of the toil put in by Kim, and nine other nurses who had taken care of COVID-19 patients and were subsequently confirmed to have been infected, the KNA hailed them as “hero nurses of the month.”

In the country’s monthslong fight against COVID-19 since its first virus case here in late January, the 10 nurses and a few doctors are the only medical workers who have been identified as having contracted COVID-19 while taking care of virus patients.

The country has reported a total of 11,018 confirmed infections and 260 deaths, with a fatality rate of 2.36 percent. A total of 9,821 people have been released from quarantine after recovering from the virus.

On the back of their sacrifice and hard work, the country has successfully controlled the spread of the new coronavirus.

In late February, the number of new daily virus cases peaked at over 900, but with quick and extensive testing and strict social distancing, the daily infections sharply fell to around 30 for weeks in April and fewer than 10 in early May.

As were shown in a flurry of photos showing scars on their foreheads and cheeks, medical workers on the front lines of the country’s struggle against the coronavirus outbreak had to endure weeks of challenging work.

Wearing special suits and other forms of protection is a real challenge as they can easily become hot and dehydrated from excessive sweating.

With rising temperatures, many medical workers have resorted to putting on so-called ice vests under their outer gear to stay cool, even though this weighs them down even more. 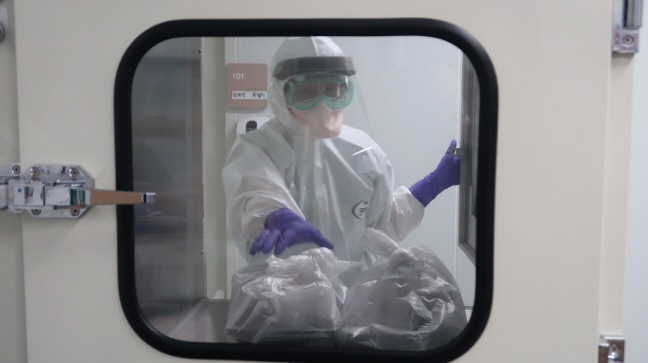 This file photo provided by the Korea Nurses Association shows a nurse at the Pohang Medical Center delivering food to COVID-19 patients being treated inside a negative pressure chamber.

In a telephone interview with Yonhap News Agency, KNA President Shin Kyung-rim said that she could not be prouder of the 21,000 nurses in the country and the thousands that directly took part in the treatment and care of virus patients for weeks on end.

“Close to 4,000 volunteered to work in the hardest hit areas,” Shin said. The nurses were assigned to intensive care units, negative pressure chambers and even nursing homes, all under very tough conditions.

Their sacrifice and dedication to duty shown by nurses and other medical workers were cheered and appreciated by many.

Thousands of citizens ranging from figure skating queen Kim Yu-na to disease control center chief Jeong Eun-kyeong have uploaded photos of them holding their hands in a thumbs-up pose with their palm stretched underneath — which means “respect” and “pride” in Korean sign language.

“There is nothing more we can ask from people after the support they have shown nurses,” she said.

But medical workers were saddened when people around them openly kept their distance not only from the nurses, but all their family members.

They were particularly disheartened when people suspected their immediate family members may have been infected just out of the fact that they were assigned to treat COVID-19 patients.

Shin once again called on people to bear in mind the sacrifices made by medical workers and asked them to do their part to stop the spread of the illness amid growing concerns over potential upticks in virus cases tied to night clubs and bars in the capital city.

“I ask everyone to follow hygiene, safety and quarantine guidelines being announced by health authorities,” she said.